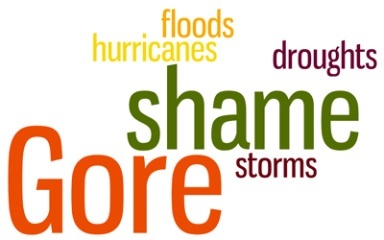 During the 24 Hours of Reality event, people all around the globe living with the impacts of climate change will connect the dots between recent extreme weather events ” including floods, droughts and storms ” and the manmade pollution that is changing our climate.

I guess all the well-intentioned people associated with that brand new campaign missed the blog post by environmental studies professor Roger Pielke Jr. in February that declared:

What seems obvious is sometime just wrong. This of course is why we actually do research.Connecting the dots is fun, but it is not science.

Pielke thinks climate change is a concern. He thinks we should strive to decarbonize our energy supply. But he is a person of integrity. And since there’s currently no evidence to support the simple-minded linking of natural disasters to CO2 emissions he says so.

In 2006 Pielke helped organize an international workshop on climate change and disasters such as floods and storms. Twenty-four papers were presented at the workshop, spanning a range of analyses and opinions. In the end, after two days of discussion and debate, the participants jointly agreed to a series of consensus statements.

According to these experts, there is currently no evidence that human-generated greenhouse gas emissions are making storms – or floods – worse. Moreover, they think it’s unlikely such evidence will become available in “the near future.”

So why, in the name of heaven, is Al Gore now spending time and money on a campaign that claims the exact opposite?