Home Entertainment Thomas Doherty Was Surprised By His First High Fidelity Song, Too 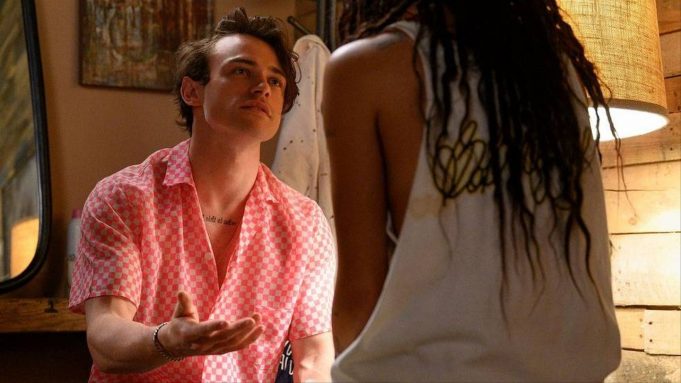 Thomas Doherty loves “Kiwi,” by Harry Styles. It’s “sexy” and “so good,” he says, tucked into the back table of a Brooklyn coffee shop. He sings a little of “First Time Ever I Saw Your Face,” the Roberta Flack version, and shouts out the Rolling Stones’s “Gimme Shelter,” before pausing. Coming up with your all-time, top five favorite songs isn’t easy. He has to think of good ones. “Can I get 10?”
I would give him 10, personally, but those aren’t the rules of High Fidelity, the new Hulu TV series that reimagines the John Cusack anti-rom-com, itself an adaptation of the Nick Hornby novel. It’s a cover of a cover, with some 21st century updates: Rob, the jaded owner of a Brooklyn record shop, is played by Zoë Kravitz, whose to-camera asides center the swirling chaos of the average 20-something’s romantic life. She and her coworkers, Simon (David H. Holmes) and Cherise (Da’Vine Joy Randolph), spend plenty of time detailing their top five picks in any given musical category: Top five reinventions. Top five songs about “me time.” Top five recording studios. And while this one isn’t about music, it is the most crucial: all-time top five most memorable heartbreaks.

Doherty isn’t one of those heartbreakers, but he makes a play for it as Liam, a buzzy guitarist primed for rock stardom, in part due to the weight of a label behind him but also because he looks like Harry Styles. He is equal parts floppy hair, wider-than-possible grin, and tattoos peeking out from collared shirts. Doherty has a similarly boyish charm: He arrives via scooter to our meeting and is currently cozied up in a sweatshirt with the word “Malibu” emblazoned across the chest. He admits that he’s jet-lagged, then waxes about how much he loves the New York borough, so much so that it was a key factor in why he wanted to be part of this new High Fidelity.

“I remember my parents watching [the original] in the living room and kind of absentmindedly wandering in,” he says. Doherty especially enjoys its use of asides that break the fourth wall, though he found it “quite funny” the first time Kravitz filmed one with him around. “I laughed a couple of times, because it’s like having a conversation, and then….” He turns and says something inaudible to the empty table next to us.

But for Doherty, who lives in Hollywood with his girlfriend (actress Dove Cameron), being part of a show that is a love letter to Brooklyn, bonding with his cast mates and crew members at neighborhood bars, made the project feel special. “It’s just really cool and really creative. But I don’t like the weather,” he adds, with a laugh. He stayed here for nearly two months while filming, and revelled in what was a “constant flow between socializing and work.” He was impressed when Kravitz and Holmes went long on their own favorite music: “They knew every artist,” he remembers, visibly awed.

The show introduces Liam while he performs a pared-back take on Boyz II Men’s “I’ll Make Love To You” at a bar, which makes Rob question if she prematurely wrote off the slow-dance jam. (That existential crisis probably has something to do with her attraction to Liam, who later invites her to visit him on tour in Mexico City, in a move that is at once deeply romantic and clearly not a big deal to him at all.) The parallels in casting weren’t lost on Doherty either — in the film adaptation, Cusack’s Rob falls in with a cooler-than-cool soul musician, played by Kravitz’s mom, Lisa Bonet. He brushes off any possible comparison before I can bring it up, laughing. “I don’t think anyone’s as cool as Lisa Bonet,” he says.

To prepare for the part, Doherty learned to play the guitar, mastering the four songs Liam sings throughout the series. That includes the Boyz II Men throwback, which he says is “weird coming out of a Scottish white boy. I got the script and was like, Is this the right song? Really? Fair enough.” Even so, he wouldn’t pursue work as a musician. “I’ve done musical theater,” he says, pointing simultaneously to his middle school acting roles and the Disney Channel juggernaut Descendants franchise. “But no music career. I just don’t have that passion.”

Instead, he’s focused on what will come after his acting career. Though he isn’t sure where it will take him next, he’d love to play a villain of the Heath Ledger-Joker archetype. “They’re very complex,” he says. “What’s your motivation for that? What happened to you? And then you question yourself and your own flaws, what is right, and what is wrong.” Villains don’t necessarily think they’re villains, he adds. Even the people who broke your heart thought they were doing the right thing for themselves.

Doherty is grateful for his time with Disney Channel and on the CW’s vampire soap Legacies. He is most excited for new projects that make him question what he knows to be true about himself. “I want to challenge myself intellectually,” he adds. High Fidelity did that by casting him in a role that would typically be relegated to female characters — the gorgeous rebound, the eye-candy love interest — which in turn pushed him to reflect on his own place in society. Does that make him the manic pixie dream boy of this scenario, subverting a stereotype that just won’t end? He cackles, then says he’s game — and that he’d return for Season 2 in a heartbeat. Maybe Liam could come back from tour and throw Rob’s emotional equilibrium into another lurch, he offers. Maybe he could cover another guilty pleasure ballad, like the Peter Frampton tune Bonet made her own 20 years ago. A cover of a cover.

“This show is gritty, it’s not afraid to show the dark side of dating,” he says, adding that he’s most proud of the show’s quiet progressivism — that Rob is a Black, female business-owner, that every character can explore their sexuality and their identity and likes and dislikes on their terms, and that women aren’t just claiming complex and desirable roles — they’re owning their own narratives, too. “It’s messy for girls, as well. They don’t have to be prim and proper. I found that really cool,”  he says. “It’s really important to keep chipping away at the stereotypes, and these oppressive ways that people should be in society. Because the minute one thing clicks, it all starts unraveling.” All you’re left with is yourself — and maybe a really good playlist.