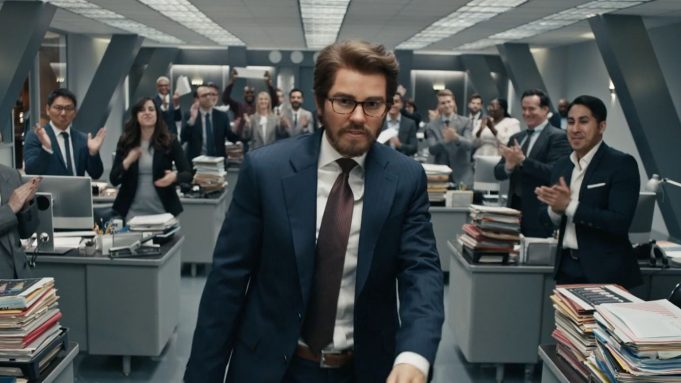 Taylor Swift becomes the world’s most annoying dude ever in “The Man,” the latest video from Lover that follows what it’s like to annoy everyone around you while being oblivious to the fact that it’s happening. It attacks the idea of toxic masculinity at every turn. Whether it’s taking up unnecessary amounts of space on a crowded subway, completely disregarding the surrounding health of others by then smoking on said subway, or demanding credit for being a good dad for doing the least, Swift brings some much-needed spotlight to problems that dudes bring on the regular. And she does it not just from the director’s seat, but, also as a guy herself.
It’s not revealed until the end of the video that Swift is actually the guy that it follows around, caked under makeup and prosthetics to become an unlikeable, bearded bully. Before that Swift connection, the guy is completely unbearable. Maybe it’s the pencil-thin beard or the naturally smug smirk that stretches across his face like he’s Batman’s archnemesis. He’s revealed to be a business top dog at the beginning, strolling through his office and yelling at employees while crumpling paper and tossing it in the air. Winking at the camera, he’s the ultimate badass. Everyone wants to be like him.

Outside of the office though, he’s even more unbearable. He pees glittering urine on subway walls and treats women like objects on an expensive yacht. Walking through a hallway of different hands, he’s high-fiving all of the bros around the world who think that his lifestyle is the stuff of dreams. 58 years later in the video, he marries a woman who’s much younger than him and smashes cake against her face, annoying her and making her second guess this new marriage.

At the end of the video, it is revealed that the director is Swift and this unbearable guy, with Dwayne Johnson’s booming voice in a surprise voiceover, asks her how this take was. Swift wants him to be “sexier, and a little more likable this time,” for the next one. As they set up to get going again, it ends with the process to transform Swift into this dude being revealed.

Swift dropped Lover last August. In January, she released the Miss Americana documentary on Netflix and it featured a new song, “Only the Young.”

Check out Swift’s testosterone-filled video for “The Man” up above.