Home Entertainment Pop Smoke Made Me Relive My Childhood 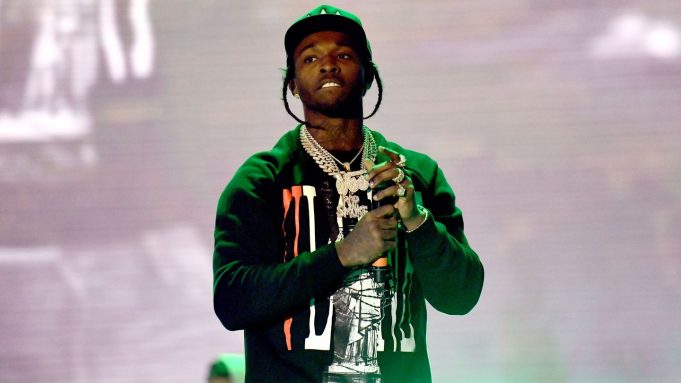 I wrapped my first durag in front of my bathroom mirror when I was eight. Then, I sprinted to my dad’s closet and put on one of his Dallas Cowboys caps. A few minutes later, I was sitting on my bed, grinning, watching the video for 50 Cent’s “Wanksta.” In it, he cruised down the street in the backseat of a Hummer, sneering at the competition while delivering brutalizing raps that dripped with charisma.
Pop Smoke, who was shot and killed on February 19 during a home invasion, similarly had kids beaming at him. Instead of a durag and a hat, fans wanted to recreate his hairstyle and sport his thick, hater-blocking sunglasses. The 20-year-old was at the forefront of Brooklyn’s drill rap movement thanks to a rapid ascent and an alluring persona. He didn’t have huge dimples, a Caesar cut, or baggy clothes like 50 did. And yet, at 26, I felt like I was a kid again when I watched his videos.

A rapper out of Brooklyn’s Canarsie neighborhood — often called the “Flossy,” thanks to a Fabolous lyric about it being a flashy place — Pop Smoke was buff, gruff, and about his stuff. He was the match for the gasoline-soaked scene (alongside fellow rising stars 22Gz and Sheff G) and became incendiary with “Welcome to the Party,” the hypnotizing 2019 smash hit that peaked at No. 5 on Billboard’s Bubbling Under Hot 100 Singles chart.

To be a fan of Pop Smoke, you have to open your ears and adjust your expectations of what rap sounds like in 2020. Pop Smoke’s voice was a one-of-a-kind, guttural, roaring whisper. Over brisk, alien beats often produced by 808Melo, a producer he found online and struck up an important and endearing relationship with, the rapper clouded the air like black smog, groaning bars that clunk and shake the ground. He was intense and carefree at the same time — goofy, charismatic, and more entertaining than melody chasers and carbon-copy lyricists.

Curtis “50 Cent” Jackson captivated a generation just by being himself, pushing for power in the cold Queens streets that he climbed out of. He survived being shot reportedly nine times and became a rap star, moving with the gusto of someone who had been here long before. As his 2003 debut album Get Rich or Die Tryin’ showed, his voice boomed as he told stories, squeaked in various notes as he performed primitive melodies.

Songs like “Wanksta,” “In Da Club,” and “Many Men,” put virtually anyone in his G-Unit shoes. Like me. I eagerly drank up the sound and aesthetic, in awe of his presence because of how far out he puffed his chest and yet could still walk straight. My room was a chapel dedicated to G-Unit. Two posters decorated the walls. A few form-fitting G-Unit tank tops (that I never filled out) littered the floors. I watched his videos where he stood centerstage with his eyes low, making sure that the rap world orbited around him.

Since Pop Smoke released his second album, Meet The Woo 2, just 13 days ago, I’ve thought about how he had a similar, infectious presence that made listeners want to analyze him. He released just two projects during his lifetime, but like 50, he won over fans with his charm first and music second. When the beat kicked off, his accent embellished the harsh and original delivery, making you ready to repeat a verse the second it went off. They both carried a veteran-like demeanor that seemed beyond their age brackets.

That’s why it hurts so much to know that Pop Smoke was just getting started. Co-signs from everyone from French Montana to Travis Scott (who he collaborated with for “Gatti”) proved that he was quickly approaching his Get Rich or Die Tryin’ breakout moment, where household-name status follows getting the formula just right. It felt like witnessing the opening lines to rap’s new chapter, one again characterized by New York’s genre supremacy. As if he was connecting the lineage between the two, Pop Smoke even repurposed a 50 Cent lyric on his latest, and one of his biggest, tracks, “Christopher Walking,” singing “I ain’t no window shopper” in 50’s cadence. Pop Smoke was picking up the torch from 50 and carrying it into a bold new future.

I feel not only for Pop Smoke’s family, friends, and associates, but also for the kids who had their durag-tying moments with him on their screens. Upon finding out about his death, 50 Cent posted a video of the two, all smiles, performing together at a function. Seeing the two icons together sparked something in my brain that connected the two at the seams. “R.I.P to my man Pop Smoke,” 50 tweeted. “No sympathy for winners. God bless him.” Their legacies together are forever tied not only to New York, but to hip-hop itself.

If I was still a kid and didn’t have this low Caesar cut with waves, I damn sure would have Pop Smoke’s braids.