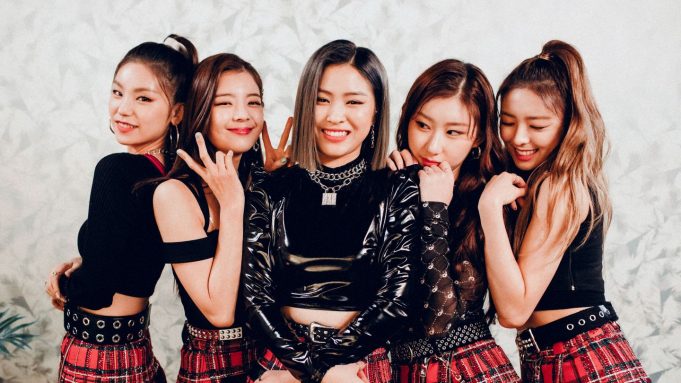 Before their debut in February 2019, the five members of ITZY were known as “the unicorn team” within their South Korean entertainment company, JYP. Youngest member Yuna zealously adopted the majestic moniker, adding a unicorn emoji beside each member’s name in her phone’s contacts list. “Unicorns are very free, and we can relate to that feeling,” she tells MTV News, sitting beside her teammates in a cozy studio space in New York. They’ve just finished a busy press day following the conclusion of their first United States tour, and after a snack of pizza and gummies, they’re ready to talk. Yuna, feeling energized from the modest sugar intake, adds in Korean, the mythical creatures are “playful, but kind of cute — just like us.”
She’s not wrong. It’s a dichotomy of powerful and delicate, pretty and punk that makes the girl group’s presentation particularly potent. Today, they mix black leather boots and studded belts with red plaid skirts and dangling chain hardware; their smiles are blinding. There’s an effervescence to ITZY that’s a testament to their ages — Yeji and Lia, both 19, Ryujin and Chaeryeong, both 18, and Yuna, 16 — as well as their dynamic sound, which is big on energy and attitude. Yuna calls their music “medicine,” or an instant mood-enhancer. “We hope that it gives people energy,” Lia adds in English. “Like a vitamin.”

With their upbeat bops and confident, cool demeanors, the rookies dominated 2019 with two smash singles: “DALLA DALLA” and “Icy,” which swept televised music programs and topped the charts in South Korea, becoming mainstream hits with major crossover appeal. The vibrant visual for their premiere track “DALLA DALLA” (meaning “different” in Korean) became the fastest debut music video to reach 100 million views on YouTube; to date, it’s racked up nearly 177 million views. The global demand for ITZY grew so high after the release of their EP It’z Icy in August that the group embarked on their U.S. showcase tour in the new year, bringing them to five cities across the States, from Los Angeles to Brooklyn.

“I felt a lot of different emotions on this tour,” leader and eldest member Yeji says. “We’re already like a family, but I feel like we got even closer. It’s not just about improving our skills, because we’re performing a lot and can see the improvements, but we’re experiencing new things. And we get to do it together, which makes it more special.”

It’s taken years — spent in and out of practice rooms, staying up to “4 or 5 in the morning,” according to Lia, talking and eating their favorite snacks on the floor of their shared dorm — to build this kind of sisterhood, one founded on trust, communication, and “fruits,” soft-spoken Chaeryeong enthusiastically adds. For the past year, they’ve spent nearly every day together, and before that, they trained alongside one another. In that time, they’ve picked up on each other’s quirks, like the way Yeji routinely eats jellies and chips for dinner, or how Lia recoils at the mere thought of cucumbers.

“We’ve known each other for a long time, so we don’t really have any problem communicating,” Lia says. “But we do have different personalities.” Ryujin is quick to add, “We have a lot of differences.” After all, a certain kind of alchemy is required to make it work. Yuna is “the energetic one who makes us smile.” The mischievous maknae (youngest member) has a similar effect on fans. “I will keep smiling because someone said to me, ‘Your smile makes me smile,'” she told the crowd at the final stop of their showcase tour in New York. Meanwhile, meticulous dancer Chaeryeong “catches all of our mistakes,” Lia adds. “She takes care of us.” Yeji stands out with her striking visuals, trendy ponytails, and memorable, crowd-killing parts, but the members say their leader is the “most hard-working,” someone on whom they rely for honest feedback and encouragement. “When I’m struggling, I get a lot of confidence from practicing a lot and seeing those results on stage, especially when the fans react positively to it,” Yeji says. “I’ll read the comments, and that gives me a boost of confidence.”

Yeji and Lia photographed by Rebecca Lader for MTV News

If they get too stressed while rehearsing their next stage or learning a new choreography, it’s level-headed Ryujin — with her “cool vibe” and imperturbable nature — that “makes us move on,” Lia says, usually with a bad joke. As for Lia, she’s the listener of the group. “Lia is very deep-thinking, and she’s really good at empathizing,” Ryujin says. “She listens to us and our problems, and gives us advice.”

“Since we’re very similar in age, we all treat each other like friends,” Lia says. “Even if we’re very different, we all respect each other and understand each other.” But one thing they do all have in common? “We practice and train for the same dream together.”

Watching ITZY command the stage at Brooklyn’s Kings Theatre while listening to thousands of fans, officially called MIDZY, shout the words “I love myself” as they sing along to “DALLA DALLA,” it’s clear that the rookies are boldly living that dream. “DALLA DALLA” introduced the world to five young women who were unafraid to be loud in a world that would rather they remain silent. “There’s no time to care about what others think,” Chaeryeong sings in Korean on the track. “I’m busy doing what I want to do.”

That theme continues in their second single “Icy,” a fierce anthem about not being affected by others’ opinions. “I’m the type of person who cares a bit less about what others say,” Lia notes. “Normally, I don’t really care, or I care a little less compared to others.” Others, like Chaeryeong, are still working on it. “I do care what other people say,” she adds. “I’m trying not to be affected by that as much. My goal this year is to try and not be too shaken by what other people say.” In moments of self-doubt, Chaeryeong turns to an artist she admires for her own self-assuredness: Korean singer-songwriter Baek Yerin. “I listen to ‘Square’ a lot. Her voice, and that song, make me feel calm and safe.”

“Icy” is that song for ITZY fans. About the freedom of staying true to yourself and your intentions, it makes the listener feel safe and, more importantly, seen. “They keep talkin’, I keep walkin’,” Yuna sings in English on the hook. But the track’s real power is in the way that ITZY assert themselves; they’re not asking for permission or forgiveness. They’re carving their own paths with confidence in their steps, and it’s leading them to achieve their loftiest goals: Their next album, It’z Me, is already set for a March 9 release.

“‘DALLA DALLA’ and ‘Icy’ are both about self-confidence and loving yourself, so that’s part of the message we’re trying to send,” Lia says.

But it’s not always easy to practice what you preach. The members of ITZY, like many of their fans, are still learning to love themselves. “If someone would ask me, ‘If you could change something about yourself, what would you change?’ I would say, ‘Nothing,'” Lia admits. “But it’s hard to pick something that I love [about myself].” She pauses, then adds: “I love my family.”

As for Ryujin, she loves that she doesn’t sweat the small stuff. “I lose things easily, but I don’t get worried about it,” the steel-haired rapper said. “I don’t get stressed easily.” But, Lia adds, “Other people around her worry about it.”

Yuna admires her own optimism. “It’s a little awkward to say it, but I hear a lot that people gain a lot of positive energy from me,” Yuna says. “It’s really touching.” For Yeji, she loves her smile. “I feel confident when I smile,” the leader grins. Affable Chaeryeong believes her duality is especially charming. “I have many sides to me,” she says. “That’s the best thing about me.” As one of the main dancers of the group, Chaeryeong brings a fire and tenacity to the stage, but she’s also sensitive. During the last night of their showcase tour, she broke down in tears. “I will never forget [this night],” she tearfully said. “I hope to see you again.”

Watching the members interact onstage, it’s apparent that what makes them special isn’t the sparkle or the energetic anthems about self-love and confidence; it’s the ways in which they ruthlessly try to sabotage one another during a silly game, how they laugh at Lia’s aegyo (cute expressions), and when they comfort Chaeryeong at her lowest. In moments like this, they gain assurance from being together.

Of course, calls home don’t hurt either. “I talk to my mom often,” Yuna smiles. “I get a lot of strength from her. My mom gives me the best advice. She recently told me, ‘Trust yourself.’ I think she’s been listening to a lot of ITZY!”