Home Entertainment BTS Spills Map Of The Soul: 7 Album Details And Gets Real... 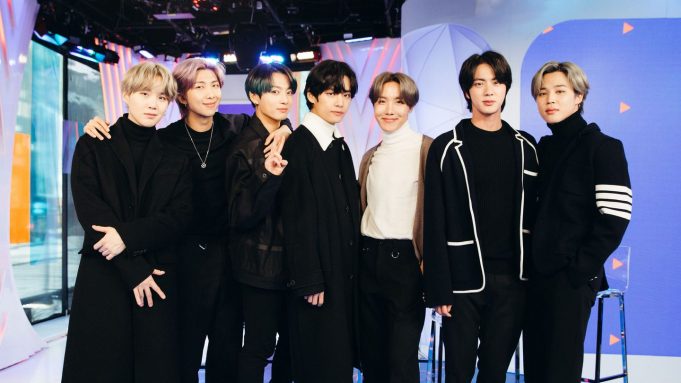 So, you’ve spent all day streaming Map of the Soul: 7, the latest album from Korean artists BTS, diving into fan theories and learning the “ON” choreography? Well, now it’s time to dive deep into the themes of the record — with the Bangtan Boys themselves. Today (February 21), the members of BTS stopped by MTV’s Fresh Out Live to celebrate the album’s release and talk about what inspired it.
Map of the Soul: 7 marks the fourth studio album from BTS, and it’s the group’s first release since last April’s Map of the Soul: Persona. “As you can see, the title of the album is 7, so we needed at least seven months to work on this album,” RM joked. In actuality, the leader said that the original plan was to release two separate parts of the Map of the Soul series — Ego and Shadow — but that the team decided to “put them together in this album” as a full-length release. This supports the original theory that Map of the Soul was conceived as another creative trilogy, but both “Shadow” and “Ego” are featured on this album as interlude and outro tracks, respectively.

And while he didn’t go into detail as to why they combined the two, he reassured fans that at the end of the day, what matters most to BTS is quality, not quantity. “It took really long, but we put the quality and as much effort as it was going to take.”

With extra time dedicated to the creative process, the group produced some of their most dynamic work to date, including new unit songs (Jimin and V’s “Friends” is a highlight) and solo tracks. “The way we write our solo songs is that we take the emotions that we feel and put them in the lyrics,” vocalist V said, translated to English. “And we try to put them in the songs.”

One of those new songs is the new single “ON,” which youngest member Jungkook revealed to the Fresh Out Live audience is a new spin on their 2013 song “N.O.”

“The name of the track wasn’t ‘ON’ in the beginning, but we came together and we had a meeting trying to decide what we wanted the title track to be and what we wanted to call it,” he said. “Because this was a reboot, we wanted to take our old song ‘N.O’ and turn into ‘ON,’ so I just threw that out, and we really liked it, talked about ‘bring the pain on,’ and we put that into the lyrics — and that’s how we came up with the title track.”

Since the new record is a reflection of their work thus far, members RM, Jin, Suga, J-Hope, Jimin, V, and Jungkook also took the time to reflect on how their music has changed in the seven years since BTS debuted. “I think we have grown as artists,” Suga said, “and as musical trends change, we’ve also tried to follow the trends.” That’s especially apparent on new tracks “Louder Than Bombs” — co-written by Troye Sivan — and rap line cypher “UGH!”

As for what fans (a.k.a. ARMY) can expect from the group’s forthcoming Map of the Soul tour, kicking off in April in Seoul. “We will work hard to prepare a great show for you guys,” vocalist and dancer Jimin said.

Of course, BTS didn’t leave the Fresh Out Live studio without a sweet message for their loyal ARMY. “We’ve been together for seven years now, we want you to know that you are special,” rapper J-Hope said.

“Like I said before,” he concluded, “you know for sure that liking BTS was the best decision ever.”