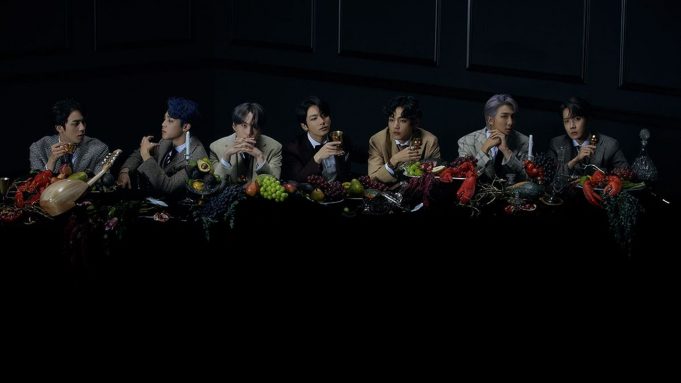 The story goes that Dionysus, ancient Greek god of wine and theater, was born twice: once in a storm of passion and lightning that ripped him from his mortal mother Semele, and again from a gap in his immortal father Zeus’s thigh. It’s been said that he forwent a life on Mount Olympus to live amongst humans, traveling the world and amassing a loyal cult of female followers known as maenads, or “raving ones,” with his intoxicating persona. Dionysus is a symbol of contrast; a deity culled from human flesh and bone, born as one archetype yet destined to live as another.
Perhaps that’s what makes him such a compelling figure for BTS, the Korean septet whose own extraordinary mythos seems as if it was forged in the cosmos. Addressing the United Nations in September 2018, leader RM said, “Today, I am who I am with all of my faults and my mistakes. Tomorrow, I might be a tiny bit wiser and that would be me too. These faults and mistakes are what I am, making up the brightest stars in the constellation of my life.” No matter how high they climb within the pop pantheon — becoming the first Korean artists to perform at the Grammys, scoring three consecutive album debuts at No. 1 on the Billboard 200 chart — they remain true to their Bangtan roots.

“Dionysus” is the closing track on their 2019 album Map of the Soul: Persona, and it’s featured on its follow-up, Map of the Soul: 7. Produced by member J-Hope, its rousing and unrefined prog rock served as the opening number of BTS’s Love Yourself: Speak Yourself world tour last year, which spanned stadiums across Europe, Asia, and North and South America, earning a staggering $116.6 million. With overt lyrical references to the gluttonous god — “Thyrsus (grippin’) Grape (eatin’)” — the track meditates on the perils of intoxicating fame through the lens of a veritable party anthem. “Art at this level is over-drinking,” Suga raps, translated into English. “The new record is the fight against oneself.” It’s a recurring theme throughout BTS’s oeuvre: Being at the top means they’re only in competition with themselves, but every milestone may lead to new disappointments. It’s a limitless feeling that’s both invigorating and empty.

On “Home,” a smooth R&B cut from the same album, Suga also addresses this confusing feeling: “Even if we have what I wanted in my dreams / Big house, big cars, big rings,” he spits, nodding to “No More Dream,” their 2013 debut single. “The unfamiliar feeling of missing something / For someone who has accomplished everything.”

BTS closed their Love Yourself chapter with a series of concerts at Olympic Stadium in Seoul, but they continued to perform “Dionysus” at year-end awards shows. It served as the explosive finale to an impressive 40-minute set at the Mnet Asian Music Awards in December; days before, at the 2019 Melon Music Awards, the seven members transformed into Greek deities for their performance. They even brought Dionysia, a celebratory festival dedicated to Dionysus, to the stage at this year’s Golden Disk Awards, hinting at the feast’s imminent return with the cryptic message “City Dionysia Begins” (likely a reference to their forthcoming Map of the Soul world tour). For BTS, the godly comparison is less of a flex and more a symbol of their own story. They are, after all, the dramatis personae in a folktale of their own masterful making.

The threads of this narrative, which members RM, Jin, Suga, J-Hope, Jimin, V, and Jungkook have been constructing visually since at least 2015, are sewn throughout their music videos and discography. But the “Bangtan Universe” extends beyond a singular story; these images — evoked through lyrics, apps, Bangtan Bombs, and concert films — define the group as they are seen through the eyes of their dedicated fans. Persona deals with this phenomenon head-on, expanding the BTS story as they’re confronted with many different versions of themselves. “Intro: Persona” finds leader and rapper RM grappling with this crisis of identity (“Who the hell am I?”) over a sample of 2014’s “Intro: Skool Luv Affair” in a throwback but also a push forward: “The me that I want myself to be / The me that people want me to be / The me that you love / And the me that I create / The me that’s smiling / The me that’s sometimes in tears,” RM raps.

But a persona isn’t just the “me” one presents to the world; it’s a mask, and this is a recurring motif in BTS’s iconography. Take their performance at the 2019 Golden Disc Awards, where they all removed physical veils while isolated in individual shadow boxes; and in the video for “Interlude: Shadow,” off the forthcoming Map of the Soul: 7, Suga is surrounded by disguised onlookers cloaked in black, illuminated by the lights of their smartphones. But it isn’t always so explicit. In the Persona song “Jamais Vu,” eldest member Jin alludes to the metaphorical camouflage we wear daily, singing, “I’m fine but I’m not fine / I told myself I was used to it.” It’s both a nod to Dionysus, known as the “masked god” who reigns over the theater, and a means to further interrogate the performative line between artist and idol.

BTS continues to grapple with that distinction, which is significant as veterans of the K-pop industry, in which musicians are put on pedestals to be worshipped and admired as idols, not unlike the Greek gods themselves. In their single “Idol,” RM proclaims that he “doesn’t care” what you call him — artist or otherwise — because he is his best when he is simply himself. “Dionysus” builds on this realization. “Born as a K-pop idol / Reborn as an artist / Reborn as an artist, reborn as an artist,” Suga raps. “What does it matter if I’m an idol or an artist, cheers.” This idea of rebirth and reinvention is inherent to the lore surrounding both BTS and Dionysus, a god known for “experimenting with identities,” according to Johanna Hanink, a writer and classicist at Brown University.

“It’s not just about artistry, it’s about trying to move beyond the constraints of being a K-pop idol,” Seoul-based writer Yung-In Chae tells MTV News. “Alcohol becomes a metaphor to become something that’s beyond yourself. In the song ‘Dionysus,’ they like to think of their art as having similar effects. It’s about going behind the boundaries of yourself.”

The more they create, the more intoxicating it becomes. “There’s a lot of ancient Greek poetry about how being out and partying is one of two ways that you can relieve yourself from the weight of the world, that you can forget your cares,” Hanink tells MTV News. “The other one is listening to good poetry, so listening to songs. These are the two things that humans can do to temporarily forget what a difficult place the world is, and both of those fall into Dionysus’s domain. It seems like a perfect synthesis in BTS’s lyrics.”

In many ways, that’s why people connect to the art BTS creates. Like any good fable, the messages woven into their music contextualize the world around them. Songs like “Go Go,” “Dope,” and “Silver Spoon (Baepsae)” address the frustrations of young people who feel like the system is rigged against them. “Paradise” and “No More Dream” preach that you don’t need to live life chasing a dream that isn’t yours. And their most recent single, “Black Swan,” expresses their deepest fears: that the work they create might one day cease to mean anything at all.

“Korea’s a very hard place to be young in a lot of ways,” Chae says. “We have an aging population, a high youth unemployment rate. In a lot of their music, like ‘Silver Spoon,’ they purposely address these generational struggles. It’s really hard to sell a song that is not a love song in [Korean] pop music… It’s hard to imagine that people want to hear a song about the struggles of the youth. It’s not as sexy, but they do that.”

Yet it’s never didactic. That’s an essential rule of myth-building: Meaning is up for interpretation and dissection. As BTS constructs their own story, their connection to Dionysus, driven by emotions and instinct, becomes clear. Map of the Soul: 7 has many meanings for the group, as RM has previously stated. The seven members of BTS have been together for seven years. Seven could be a divine number, a lucky number, or it may hint at a uniquely Dionysian philosophy where the self is surrendered to the whole, seven billion souls becoming a single universe.

On February 2, J-Hope dropped the outro track from 7, “Ego.” Throughout the video, J-Hope reflects on the path that led him to BTS, the hardships and bouts of self-doubt that nearly derailed him, by incorporating old BTS music videos, callbacks to their debut single, and childhood photos. Through trusting himself and fate, J-Hope finds himself in a sprawling, colorful city where the words “Hope,” “Trust Myself,” and “My Way” twinkle in the darkness. One word, “ARMY,” stands out. A reference to the group’s legion of fans around the world, it visualizes a universe in which they walk next to BTS, like the maenads who traveled the globe alongside Dionysus — never behind him. He wasn’t merely a god to be worshipped; he liberated his companions and, in turn, they devoted themselves to him.

It’s easy to look at BTS and deem them gods among men, atop their heap of accomplishments and accolades. From an outsider’s perspective, their myth precedes them; seven underdogs from a small company who made something out of nothing. They’re nearly immortal. But what brought them to this apex was their humanity, their ability to empathize with everyday struggles and empower those around them to love themselves and speak their truths. BTS are gods, but they make everyone else feel like gods too. It’s not a party if you’re the only one allowed on the mountain.