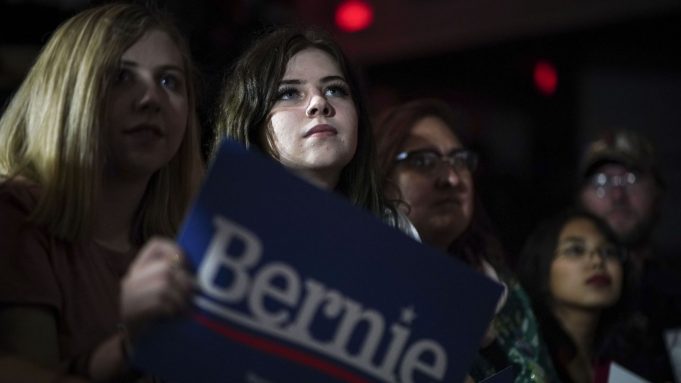 The results are finally in: Sen. Bernie Sanders won the Democratic primary caucus in Nevada, with 46 percent of the vote and 60 percent of sites reporting, according to the Associated Press. President Donald Trump won the Republican caucus, as expected.
Former Vice President Joe Biden came in second to Sanders with 19.6 percent of the vote, followed by Mayor Pete Buttigieg at 15.3 percent, Sen. Elizabeth Warren at 10.1 percent, and Sen. Amy Klobuchar at 4.8 percent. Sanders will take 10 delegates, and is currently winning in nearly every group of voters, according to the Washington Post’s entrance polls. He not only overwhelmingly won with voters under the age of 30, but he also won with men, women, Hispanic/Latino voters, first-time caucus-goers, and voters without a college degree. He also did well among Black voters and moderates, but Biden won both of those groups.

“In Nevada,” Sanders said, according to NPR, “we have just put together a multigenerational, multiracial coalition that is not only going to win in Nevada, it’s going to sweep this country.”

All eyes were on the Silver state this year for a number of reasons, key among them the aftermath of the Iowa caucuses on February 3, whose results were delayed for days after caucus workers experienced a number of issues with the app the Democratic party had intended to use to tally results. As Vox reports, the Nevada Democrats had initially planned to use the same app, which was created by the company Shadow Inc., for their caucus, but abandoned those plans shortly after things fell apart in Iowa. Instead, the Nevada Independent reported that the state party planned to use an iPad calculator tool — and it appeared to come through without a hitch.

The next vote will be on the other side of the country in South Carolina, where Sanders has been polling second to Biden. But the senator will be going into the election strong, leading with 34 of the total delegates. Currently, Buttigieg is in second with the delegate count at 23, followed by Warren with 8, Klobuchar with 7, and Biden with 6. A candidate would need 1,991 delegates to secure the Democratic nomination, so this road is in no ending yet.

NASA and SpaceX verify SpaceX’s first ever astronaut launch is a...