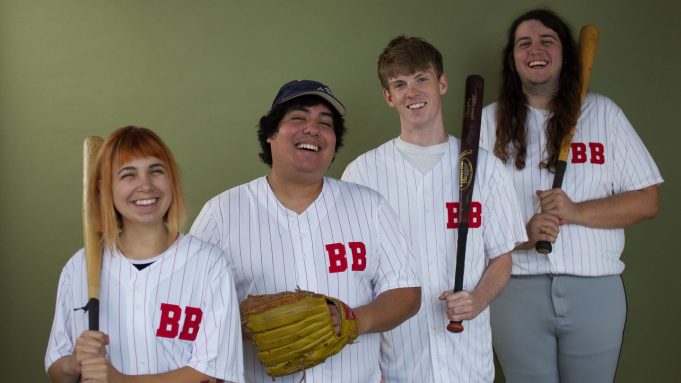 Lili Trifilio felt nervous. A year ago, the DePaul University senior was bracing for graduation in a few months, gripped by the looming post-collegiate demands that materialize once the final semester kicks off — work, money, that wide-open void of the future. What gave the journalism major a slight edge, though, was her preferred extracurricular activity, fronting the bubbly indie rock outfit Beach Bunny.
They had no record deal or hit song (yet) — just a strong string of EPs and snug homemade recordings Trifilio created by herself. They’d just started working with managers, too. Despite the promising start, that postgrad anxiety nagged, exacerbated by questions from family and friends. Trifilio’s fears were specific.

“I was debating how I was going to make music a career or if I needed to get a nine-to-five, or what the heck was going on,” she told MTV News. But it’s been a good year for both her and Beach Bunny. “I’m a lot less stressed about my livelihood now.”

She should be. Beach Bunny, which she began alone in 2015 and expanded into a full band two years later, has since played Lollapalooza, had a hit blow up thanks to TikTok, and used that viral leverage to land on a label roster alongside Sleater-Kinney and Courtney Barnett. In April, they’ll hit Coachella and might even cross paths with Trifilio’s fave Charli XCX. (“I CANT BELIEVE WERE PLAYING THE SAME DAY AS @charli_xcx omfg igxgixgixgixgixgizgixgixgix,” she tweeted after the announcement.)

But Coachella is the future, and graduation is the past. Right now, Trifilio is living in the present — and for Beach Bunny, the present is a Honeymoon phase. The group’s debut album, a delightful collection of sunny indie-pop in the vein of Alvvays and Charly Bliss, dropped on Valentine’s Day, complete with romantically entangled song titles like “Cuffing Season” and “Dream Boy.” It’s the kind of heartbreak pop that can take you deep into a well of feelings, and “Ms. California” finds Trifilio singing her lovelorn blues: “Every time you cross my mind, the words come out in figure eights.” But ultimately, it ends triumphantly on “Cloud 9.”

“I just wanted to make sure that I wasn’t just repeating the same song over and over again, even though it’s similar themes but different angles,” she said. “Like, oh, I’m sad, but this time, I’m jealous, or this time, I’m rageful.”

Trifilio and her band recorded Honeymoon in May 2019, right around the time of her graduation. It was already a lot to juggle; then came the TikToks. Beach Bunny’s 2018 tune “Prom Queen” was concurrently blowing up among users, thanks to its lead-off lyrics about body image. Trifilio’s deadpan opening, “Shut up, count your calories / I never looked good in mom jeans,” gave an anthem to the short videos, which began as likewise fretting examinations of self (young folks eating salads and stepping on scales) and have since grown to include more innocuous activities, like painting a playroom and doodling at school.

“Prom Queen” has jangled its way through nearly 430,000 different TikToks. Add that to the currently 41 million streams it’s enjoyed on Spotify and you have quite the ammo for a band ready to level up. It’s leverage Trifilio used when it came time to sign with a label, and she went with Mom + Pop Music. “The opportunity to work with the label seemed more appealing because we had a very solid fanbase,” she said of the energized crowds who hit the Beach Bunny gigs ready to mosh respectfully and even go all in on a wall of death. “We could negotiate terms more and make them super artist-friendly, where in the past, the deals weren’t that great in our favor.”

Beach Bunny first assembled as a four-piece for a noteworthy gig: a local battle of the bands that found Trifilio competing against an ex-boyfriend. “I think at the time, I was like, wow, we sound so good! But then looking back, I’m like, oh my god, none of us are in time,” she said. “Our guitarist’s out of tune. It was very exciting though.” Matt Henkels, who plays guitar, recalls it the same way: “We didn’t have a bassist and we were so new, so it probably sounded awful, but I remember feeling like we were killing it.” Drummer Jon Alvarado actually played in both Beach Bunny and Trifilio’s ex’s group (“I was like, ‘You traitor!'” she joked); despite their then-rudimentary stage presence, he was ready to go big: “I felt incredibly happy and very fulfilled and couldn’t wait for the next show.”

When you see the full band — those three, plus Anthony Vaccaro on bass — onstage now, it’s hard to picture any undergraduate jitters. They’re tight, like when they rip through a “Party in the U.S.A.” cover and when Trifilio uses the power of suggestion to lower the crowd to the floor for a slower, strummy number without any drums. “When we’ve toured with more punk bands, everyone’s just down [to mosh]. But sometimes at a headlining show, I think people, their first time seeing us, are like, ‘I am not really sure what to do,'” she said. “I feel I judge how good the show is based on the movement.”

That can also include more covers, potentially even “Bennie and the Jets” (which should ceremonially be retitled “Bunny and the Jets” if there’s any justice). Maybe Trifilio will string together her three songs called “February,” “April,” and “July” for some kind of month-centric suite, or perhaps she’ll leave those (and the nine more to be written) for a future “collector’s edition” EP. In the meantime, there’s Honeymoon, spanning quiet ballads, massive choruses, and the right pop-punk bangers to bounce to.

A month ago, Trifilio was riding out another Chicago winter, trying to beat cabin fever as she counted down the days until the album’s release by writing more songs (and sometimes jogging and meditating). Even though it just arrived — and perhaps in keeping with the demands of an ever-accelerating industry — she’s already looking past the Honeymoon period. She’s shared snippets of new songs, including lyrics, on Instagram and Twitter. “I still love Honeymoon, but the songs are almost old to me now, even though they’re new to everyone else.” Vaccaro, who joined the group a year ago (well after that fabled first show), said he feels like he’s finally locking into what Beach Bunny means and will mean going forward. “When we are learning new stuff, I feel that we now get what sound we want. I feel I just finally get what works and what doesn’t.”

Trifolio recently returned to DePaul to speak about her songwriting. She’s not thinking about the people who asked her about the financial stability and long-term viability of her musical plans a year ago. “I guess I just have more street cred now,” she said, “and I feel confident expressing it.”