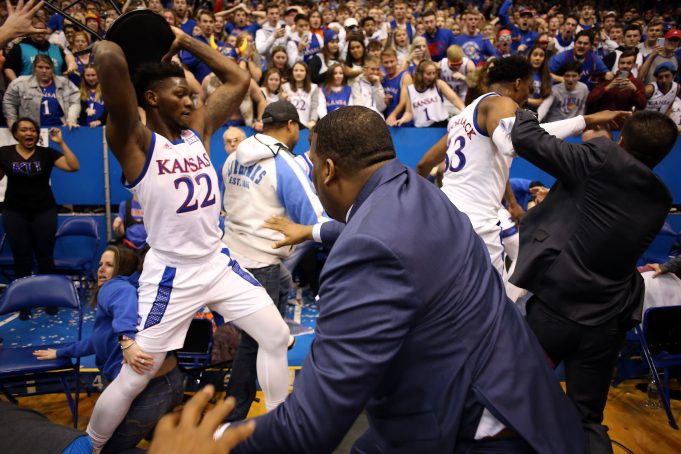 Silvio De Sousa #22 of the Kansas Jayhawks picks up a chair during a brawl as the game against the Kansas State Wildcats ends at Allen Fieldhouse on January 21, 2020 in Lawrence, Kansas.

that included punches, shoving and at least one player threatening to swing a stool.

The Jayhawks were dribbling out the time on their 81-60 victory when Silvio De Sousa was stripped by DaJuan Gordon near mid-court. Gordon tried to go for a layup and De Sousa recovered to block his shot and send the freshman sprawling, then stood over Gordon and barked at him — triggering both benches to empty into what amounted to a rugby scrum.

At one point, De Sousa picked up a stool and held it over his head before Kansas assistant Jerrance Howard grabbed it from him from behind. The Jayhawks’ Marcus Garrett and David McCormick were also in the thick of the scrum along with the Wildcats’ James Love and David Sloan, who was the first player to come to Gordon’s defense.

It took both coaching staffs, the officials and Allen Fieldhouse security to separate the teams.

“Without knowing exactly everything that went down, it was obvious to me that we played a role in what transpired and there will be penalties for that,” said Jayhawks coach Bill Self, who was already shaking hands with Kansas State counterpart Bruce Weber when the chaos erupted. “I need to see the film to comment or have any definitive thoughts on exactly why or how it got started, because to be honest with you I don’t have any idea about that.”

The fight came three days after St. Francis and Sacred Heart were involved in a wild fracas following their game in Pennsylvania. But while that incident in the Northeast Conference went largely unnoticed, the pedigree of Kansas and the fact that both schools play in the Big 12 instantly turned their brawl into a national event.

“Obviously it’s an embarrassment,” Self said. “It’s not something to be proud of. What happened showed zero signs of toughness. It’s a sign of immaturity and selfishness more so than toughness. If I was a fan watching, depending on your perspective, there would be nothing about that intriguing me to watch more.”

Then, adding to the bizarre finish, five players from each team were summoned back from the locker rooms by officials and one-tenth of a second was put on the clock. Kansas State shot technical free throws to booing from a few thousand fans, and the one make necessitated a change to the final box score.

The reason only those players returned? The rest of the players from each team — including those dressed in street clothes — were ejected because they had left the bench while the game was in progress.

“It should have been avoided,” Weber said. “It’s my guys, it’s my fault. They came here wanting to have a game, compete, and we didn’t compete the way we needed to, and probably a little frustration, especially the young guys.”

Weber had instructed his players to back off in the closing seconds and let the game run out. And while Self said he didn’t agree with the steal and layup attempt, he did acknowledge that Kansas State was merely playing to the final whistle.

“Silvio knew he was being defended,” Self said. “He took his ball, and certainly the way Silvio reacted to getting his ball taken, going and blocking his shot, that’s fair game. What transpired after that is what set everything off.”

While he won’t be alone, De Sousa is likely to receive the stiffest punishment from the incident — the latest chapter in a career that has brought far more embarrassment and frustration to Kansas than pride and success.

It was De Sousa whose name surfaced in the FBI probe into college basketball in October 2018, and that in part led to an NCAA investigation of Kansas. The school received a notice of allegations last September that outlined major violations in men’s basketball, levied a head coach responsibility charge against Self and alleged a lack of institutional control. Those violations are being appealed and a decision is not expected until well after the season.

De Sousa was suspended last season for his role in the case, and he was supposed to sit out this season as well. But the school successfully appealed the decision, allowing the junior forward to return to the court.

Asked what his message was in the locker room after the game, Self replied: “There was no discussion on what happened from their vantage point. We talked to them and relayed to them how selfish it was. We relayed how disappointed we are. We should be in here talking about Christian Braun and selfishness created a situation where that’s not going to be the story line whatsoever. There was no communication back and forth. It was one way.”

Indeed, Braun was the story of the game until the final seconds after hitting six 3-pointers and scoring a career-high 20 points in his first Sunflower Showdown. The freshman guard grew up in nearby Burlington, Kansas.

Devon Dotson added 18 points and Udoka Azubuike finished with 10 points and 14 rebounds for Kansas (15-3, 5-1 Big 12), which beat the Wildcats for the 14th straight time at Allen Fieldhouse. Xavier Sneed had 16 points and David Sloan had 14 for the Wildcats (8-10, 1-5), who played a part in ending the Jayhawks’ conference title run last season.

“Credit to them. They kicked our butt,” said Weber, whose chin was reddened by what he called a stress-induced reaction. “I’m just happy nothing major happened to either team where there was an escalated fight. It was a bad play at the end. It’s disappointing. Life lessons for our young guys and hopefully next time they’ll be a little smarter.”

Kansas played its best game in weeks, but it could come at quite the cost — several Jayhawks appeared to throw punches in the fracas, and that is almost certainly going to lead to suspensions. How long they last could impact how the Jayhawks fare in a stretch coming up that includes the Big 12-SEC Challenge.

‘We need to stop the panic’: Italy’s prime minister calls for calm as virus spikes

Should I use a credit card to donate to a political campaign?