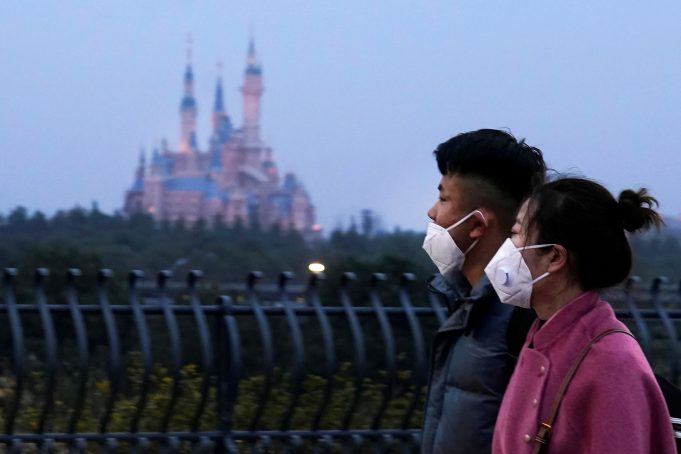 Visitors wearing masks walk past Shanghai Disney Resort, that will be closed during the Chinese Lunar New Year holiday following the outbreak of a new coronavirus, in Shanghai, China January 24, 2020.

This is a live blog. Check back for updates.

8:32 am: 3M drops on disappointing earnings, new round of job cuts

Shares of 3M are down more than 2% in the premarket after the manufacturing giant posted weaker-than-forecast results for the previous quarter. The company posted a profit of $1.95 per share on revenue of $8.11 billion, both of which are below analyst expectations. Investors also sold the stock after the company announced a new round of job cuts. Shares of 3M are the second-worst performers in the Dow over the past 12 months. They are down more than 9% in that time. —Imbert

Shares of auto supplier Delphi Technologies jumped more than 15% in Tuesday’s premarket trading after BorgWarner announced that it will acquire the company in an all-stock transaction valued at $3.3 billion. A press release said that the acquisition will strengthen BorgWarner’s “power electronics products, capabilities and scale.” Delphi Technologies was one of two companies spun out of Delphi Automotive in 2017. The other was Aptiv, which focuses on tech systems in cars. — Stevens

United Technologies delivered fourth-quarter earnings of $1.94 a share, better than the $1.84 analysts surveyed by FactSet expected. But shares slipped 1.3% in premarket trading as United reported its aerospace division would face “an estimated headwind of approximately $550 to $600 million resulting from the 737 MAX” in 2020. The industrials giant also told shareholders it would forecast year ahead earnings and cash flow once its acquisition of Raytheon is complete. —Sheetz

Despite Apple’s plans to ramp up iPhone production in the first half of 2020, its suppliers are warning that the rapid pace of production could be derailed by the outbreak of the coronavirus in China’s Hubei Province, the Nikkei Asian Review reported Tuesday. Apple has asked its Asian suppliers to make up to 80 million iPhones in the first half comprised of 65 million of its older iPhones and up to 15 million of a less-expensive model it plans to unveil in March, according to the report. However, the mass production that’s scheduled to begin in late February might be delayed due to the virus outbreak, the Nikkei reported. Apple is set to report first-quarter earnings Tuesday afternoon after the closing bell. Shares were up 1.1% in premarket trading. —Franck

The 3-month Treasury bill yield was briefly higher than the 10-year yield in the early morning hours New York time.
The coronavirus has set off a stampede into 10-year Treasurys as investors seek a safe haven, and the yield touched a low of 1.57%. It was at 1.63% as stock futures rebound Tuesday morning from Monday’s selling. The inversion of the yield curve is sometimes an ominous sign of a coming recession, but the yield curve had inverted last year and steepened again as investors were cheered by improved trade relations between the U.S. and China. —Domm

8:17 am: Chip stocks rally after Huawei gets limited access to UK’s 5G networks

8:12 am: Coronavirus-related names rebound with the broad market

Travel companies affected by the deadly coronavirus are bouncing back along with the broad market after a deep sell-off since last week. Shares of Wynn Resorts, one of the hotel and casino stocks that took the hardest hit because of its Macau exposure, are up nearly 2% in premarket. Airlines Delta and United Airlines both climbed almost 1%, while Carnival Cruise Lines also rebounded 1.2%. —Li

8:10 am: Stock futures rise as Wall Street tries to rebound from worst day in more than 3 months

Wall Street is trying to rebound from its worst session since October, with U.S. stock futures trading higher. Dow Jones Industrial Average futures are up more than 140 points, while S&P 500 and Nasdaq 100 futures pointed to solid opening gains. On Monday, the Dow dropped more than 450 points and wiped out its gains for the year as coronavirus fears deepened. But while futures pointed to a decent start, not everyone is ready to look past the coronavirus fallout. CNBC’s Jim Cramer said in a tweet: “I wouldn’t trust the market until the future are down, perhaps dramatically to flush out those who think the virus is unstoppable.” —Imbert