Here are the most important things to know about Thursday before you hit the door.

The nation’s fourth-largest bank reports fourth quarter earnings before the bell on Thursday. Barclays is expecting Morgan Stanley to report earnings of $1.08 per share, compared to the 80 cents per share earned in the same quarter last year. The firm expects Morgan Stanley’s total revenue to come in at $40.287 billion, compared to the $40.107 billion earned in the fourth quarter of 2018.

Shares of Morgan Stanley have risen more than 24% in the last three months.

We’ll get a read on the health of the U.S. consumer on Thursday when the Commerce Department releases December retail sales. December is one of the busiest months of the year for retail with the holiday shopping season, but retailer Target’s stock fell 7% on Wednesday after reporting disappointing holiday sales results. The big box retailer showed weakness in the toy and electronics categories.

Economists are estimating a 0.3% rise in retail sales in December, according to data surveyed by Dow Jones.

Retail sales increased less than expected in November as Americans cut back on discretionary spending because of bleaker economic growth forecasts for the fourth quarter. Retail sales rose 0.2% in November, while economists polled by Dow Jones were expecting a rise of 0.5%.

Excluding autos, economists are expecting a 0.5% rise in retail sales in December, after a 0.1% rise in November.

We’ll get a read on the strength of the manufacturing sector when the Philadelphia Federal Reserve’s manufacturing index for January comes out on Thursday.

The Philly Fed’s manufacturing gauge fell 10 points in December, its lowest reading in six months, showing further signs of manufacturing weakness. Economists polled by Dow Jones estimate a reading of 4 in January, up from December’s read of 0.3.

Morgan Stanley (before the bell)

Charles Schwab (before the bell)

CSX (after the bell)

— With reporting from CNBC’s Michael Bloom. 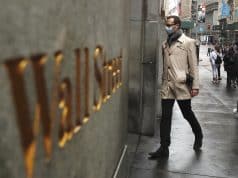