Home Health Art for Good Cause an Initiative by Artist Jibin George To Raise... 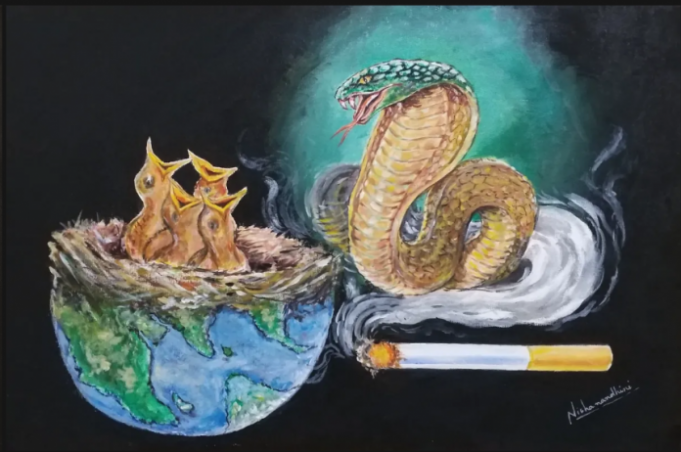 “Not all of us can do great things. But we can do small things with great love –

This year, artforgoodcause.com is making some electrifying new plans to work with new artists to expand the idea of creating a social impact around the world through art. The idea is multiple international art competitions to showcase artworks from emerging artists that talk about Global Warming, Youth and Tobacco and other profound causes.

The idea of backing new artists by showing their work is a great cause in its own right. But, what’s even more thrilling, effective, and rewarding is showing artworks that will also contribute to a good cause.

In 2019, Art For Good Cause organized an art competition with the support of Art Impact International Organization on the subject Protect Kids From Tobacco. The event was inspired by WHO Initiatives on anti-tobacco. There were 55 artworks from 9 countries and it was an amazing and inspiring event. You can see some of the artworks displayed on the artforgoodcause.com website.

Who initiated Art For Good Cause?

Art For Good Cause is an initiative by Jibin George a self-taught artist that began creating beautiful artworks since 2012. He is from India and it is currently living in Texas.

He has painted more than 100 portraits and he has done multiple exhibitions and workshops in the United States and India. In his work, he utilizes acrylics, oil, and graphite as is the best way to portray the subject, scene, and expressions in his artworks.

In 2019, he introduced the concept of Art For Good Cause. The initiative was developed as a way to used his creativity as well as art across the world to create social impact. His main reason is to motivate emerging artists and to create an international platform to showcase their talents. His mission is to help emerging artists find global recognition.

Art For Good Cause was created with the vision to make everyone understand the social impacts of hypocrisy. Jibin George, firmly believes that art is the best way to explain the feelings and emotions of people and to learn the culture and lifestyle around the world.

Jibin George chooses art as the platform to go ahead with this initiative as his favorite quote said- “A picture is worth a thousand words.”

Tobacco Warning:  Even Non-Smokers Are At Risk

In another study, the American Cancer Society pointed out that about 3,000 non-smoking adults die each year of lung cancer because of the effects of second-hand smoke. Second-hand smoke is a mixture of the smoke from the burning end of a cigarette, pipe, or cigar. The smoke exhaled by smokers is involuntarily inhaled by non-smokers. Second-hand smoke actually lingers in the air for several hours where a smoker puffed a cigarette.  Second-hand smoke, also known as Environmental Tobacco Smoke (ETS) is now considered by the US Environmental Protection Agency (EPA) as a cause of cancer, a classification that has long been made by various health and medical associations. Second-hand smoke contains formaldehyde, benzene, vinyl chloride, arsenic ammonia, and hydrogen cyanide — all of which are toxic or carcinogenic.  Cited below are some of the facts and important information about the risks of smoking and exposure to second-hand smoke:

Quitting smoking is a difficult undertaking that demands discipline and commitment.  Some can quit “cold turkey” while others need professional help and medication.  Nicotine replacements in the form of patches have also been released in the market to help smokers who want to stop their habit.

While smoking is, in reality, an addiction — there is help available.  Quitting this vice is a life-and-death issue.  Getting rid of tobacco will not only help decrease health risks, but it would also help spare non-smokers from the dangers of second-hand smoke.

Art can be both inspiring and intriguing. Every time we see beautiful art it awakens the creativity and beauty inside of us all. There is nothing more powerful than stunning works of art to make us think about deeper issues.

A great artwork can make people stop if even for just a couple of minutes, to have an emotional and inspiring experience. The amazing thing about this experience is that these emotions are re-lived every time we see that artwork again.

Now, you can see why art is the best path to raise awareness for a good cause. Art is one of the few things that can have a powerful and lasting emotion in people that makes them take action.

Just like music, artworks stick with us more than just words. Most artists are very conscious of this influence that art contains, which is the main reason why so many people choose art as a way to express themselves, make a statement, or promote movement for a cause.

As an artist, it is important to donate your time and talent to help raise awareness of important issues such as global warming and tobacco. With beautiful art, people can stop and think about ways to make the world a better place.