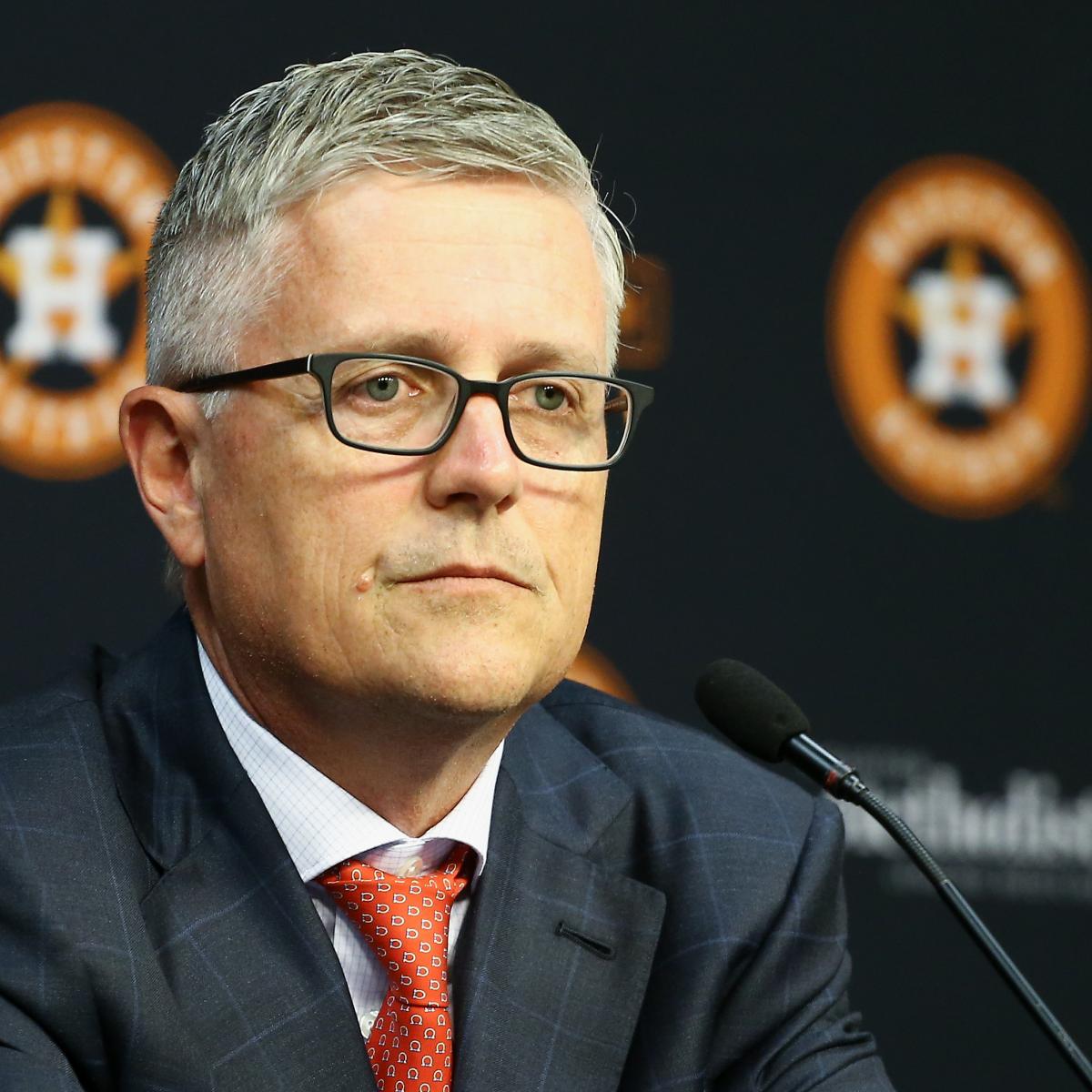 Jeff Luhnow and manager AJ Hinch have each been suspended for the 2020 season without pay as part of Major League Baseball’s ruling in the team’s sign-stealing controversy.

The league announced the decision Monday, per Mark Feinsand of MLB.com. Jeff Passan of ESPN first reported the news. In the wake of the penalties, Luhnow and Hinch were fired by the Astros, a decision team owner Jim Crane announced at a press conference Monday.

The organization has also been fined $5 million and will forfeit its first- and second-round draft picks in 2020 and 2021, according to Ken Rosenthal and Evan Drellich of The Athletic.

Former Astros assistant GM Brandon Taubman, who the team fired in October after an outburst at female reporters, has also been placed on baseball’s ineligible list.

MLB Commissioner Rob Manfred provided a statement on the ruling:

Intro of a nine-page statement from Commissioner Rob Manfred on the Houston investigation. https://t.co/LupM6pKCbH

He also provided his thoughts on the impact of these events, via Feinsand:

“I find that the conduct of the Astros, and its senior baseball operations executives, merits significant discipline. … The conduct described herein has caused fans, players, executives at other MLB clubs, and members of the media to raise questions about the integrity of games in which the Astros participated. And while it is impossible to determine whether the conduct actually impacted the results on the field, the perception of some that it did causes significant harm to the game.”

Boston Red Sox manager Alex Cora will face “harsh” punishment as well for his role as a bench coach on the 2017 team, but New York Mets manager Carlos Beltran and others who played for the Astros at the time will not be disciplined, according to Passan.

Houston’s punishment comes in the wake of MLB’s investigation that began in November amid claims of cheating.

Former Astros pitcher Mike Fiers and other unnamed sources with the club told Rosenthal and Drellich they employed a system to steal signs from opposing teams during games in 2017:

“The Astros’ setup in 2017 was not overly complicated. A feed from a camera in center field, fixed on the opposing catcher’s signs, was hooked up to a television monitor that was placed on a wall steps from the team’s home dugout at Minute Maid Park, in the tunnel that runs between the dugout and the clubhouse. Team employees and players would watch the screen during the game and try to decode signs—sitting opposite the screen on massage tables in a wide hallway.

“When the onlookers believed they had decoded the signs, the expected pitch would be communicated via a loud noise—specifically, banging on a trash can, which sat in the tunnel. Normally, the bangs would mean a breaking ball or offspeed pitch was coming.”

Per Passan, Kevin Goldstein, a special assistant to Luhnow, wrote an email to team scouts prior to the 2017 playoffs asking them to spy on opposing teams’ dugouts in an attempt to “steal signs and suggesting the potential use of cameras to do so.”

Manfred told reporters in November that the league would “investigate the Astros situation as thoroughly as humanly possible.” He said its focus expanded beyond 2017 to include the 2018 and 2019 seasons but that no other teams were being investigated at that time.

The last time a team was disciplined for attempting to cheat was in 2017 when the Boston Red Sox were fined an undisclosed amount after the New York Yankees accused them of using an Apple Watch in an attempt to steal signs.

The Astros won the World Series in 2017 by defeating the Los Angeles Dodgers in seven games. They won the American League Championship Series last season but lost to the Washington Nationals in the Fall Classic.