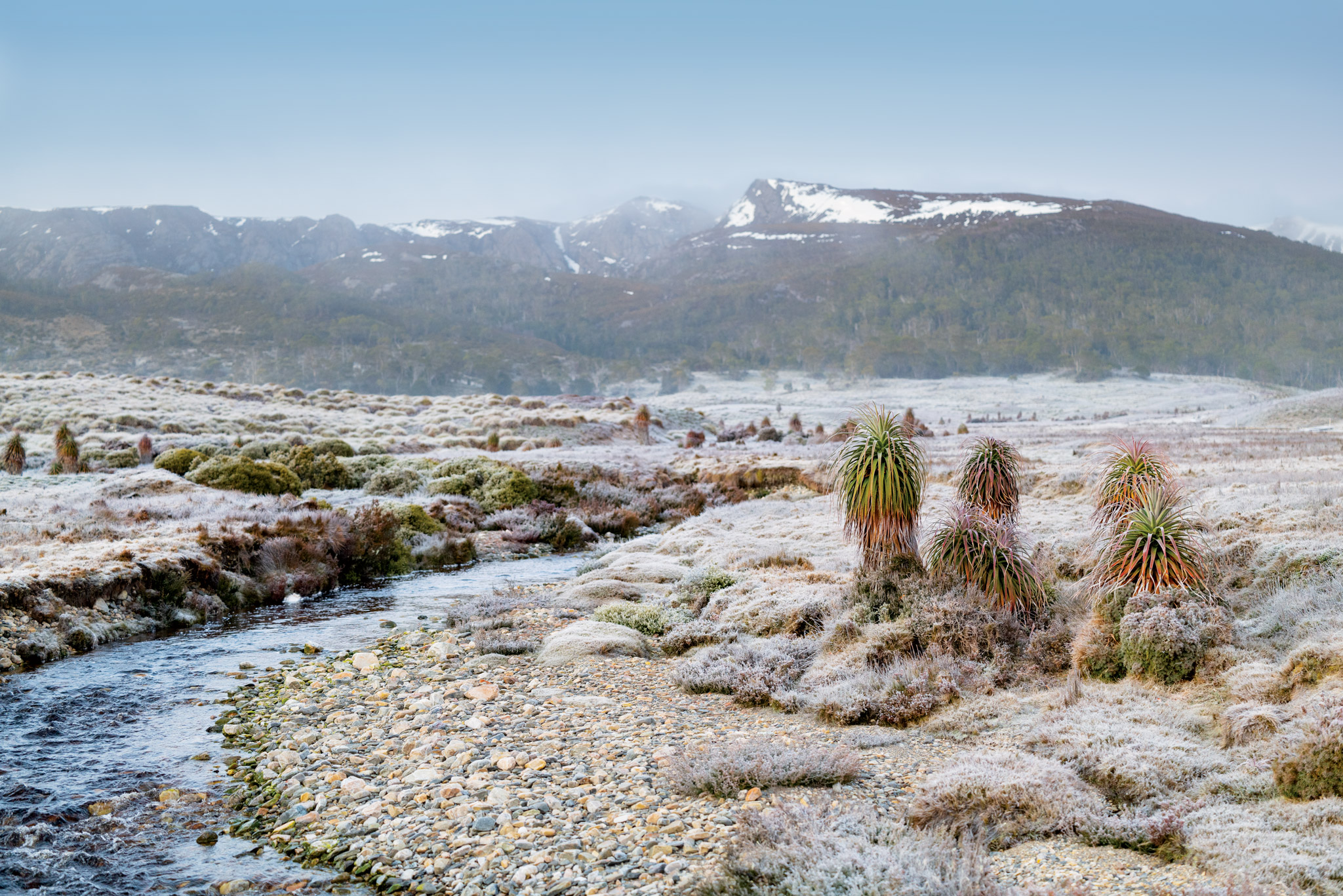 “Explore the possibilities” reads the license plate of my rental car, complete with a Tasmanian tiger peeking out from between two numbers. Challenge accepted, I think, tossing my hiking boots in the trunk and setting the GPS to the nearest national park.

Once mocked as a backwater, Tasmania is now one of Australia’s fastest-growing tourism destinations and one of National Geographic’s Best Trips to take in 2020. Key to the appeal of Australia’s southernmost state is its raw natural beauty, which it owes largely to a combination of its remoteness (airport expansion plans are under way, but international flights are still a few years off) and the enduring green spirit of its half million or so residents.

Swathed in 2,000-year-old trees and home to real-life devils (and even “tigers,” if you believe the rumors that the officially extinct thylacine lives on), it’s the stuff outdoor adventures are made of.

After making the trek here, visitors find that most of Tassie’s attractions are surprisingly accessible. It takes just four hours to drive the length of the state. No matter where you base yourself, opportunities to become immersed in nature are never far away—nearly half the state is designated national park, after all. Curious to discover if Tassie’s newest adventure experiences are as spectacular as they appear on my social media feeds, I headed to Hobart to explore the adrenalized enticements “within cooee” (within reach) of the capital.

“Bit cuter than the tiger snake, isn’t it?” guide Joel Kovacs jokes, as a pademelon (like a mini-kangaroo) hops across our path along the Three Capes Track, pausing a few feet away to peer at us through a hedge of cutting grass once used by the Palawa (Aboriginal people of Tasmania) for basket-weaving. Along with the trio of Bennett’s wallabies and the deadly tiger snake that had joined us on the track, not to mention the echidna we spot later that day, it’s been a wildlife-watching boon.

But the views remain the highlight of this four-day, 30-mile trail skirting the soaring dolerite cliffs that prop up the Tasman Peninsula, a windswept wilderness jutting off the state’s southeastern tip. Unveiled in 2015 to tremendous expectations, Tasmania’s newest multiday trail comes complete with architect-designed bunkhouses and a smattering of “story seats” inviting walkers to contemplate the history of the peninsula while taking a breather.

Last year, Tasmanian Walking Company, which runs luxe guided hikes on some of Tassie’s top trails, launched the Three Capes Lodge Walk, with groups overnighting at private eco-sensitive cliffside lodges discreetly tucked off the main trail. Considering the gourmet meals, the local wine I don’t have to carry in myself, and the two guides’ knowledge, it’s a truly transformative way to experience the trail, which is unlike any other in Tassie. But the 880-odd tracks that lace the state’s national parks, reserves, and conservation areas each have their own unique aspects. And variety isn’t the only selling point.

“Even the trails with the best infrastructure don’t detract from the feeling of being immersed in the wilderness,” says Kovacs, a Hobart native who has tramped many of them in his decade of guiding. “Tassie’s trails haven’t been widened like you’ll see in New Zealand and elsewhere to accommodate big crowds, and I hope they’ll stay that way.” Kovacs’s favorite is the Overland Track, a six-day traverse of Cradle Mountain–Lake St. Clair National Park.

High on my own wish list is the Wukalina Walk, a four-day Aboriginal-guided trek launched last year in the Bay of Fires, so-called partly for its orange lichen-covered granite boulders.

More casual walkers find a diversity of day hikes to choose from. I squeeze in a quick jaunt to Russell Falls (and Horseshoe Falls upstream), in Mount Field National Park, which tumbles through a rainforest setting immortalized on Tasmania’s first stamp collection designed to promote tourism in 1899.

Other notable strolls include the Dove Lake Circuit beneath the towering spires of Cradle Mountain, Wineglass Bay Lookout for Freycinet National Park’s best view, and the Springlawn Nature Walk in Narawntapu National Park on the north coast for its wildlife. These are just three of 60 short walks listed by the Parks & Wildlife Service as the state’s best, and big developments are on the way.

A proposal to build six eco-sensitive hiker’s huts along the South Coast Track—Tasmania’s most remote trail—was greenlighted last year, while this past July saw the announcement of plans to develop a walking route in the Tyndall Range on the edge of the Tasmanian Wilderness World Heritage Area.

Peering over my handlebars at the steep, rocky single track jagging down between the snow gum trees, I wonder if I’ve overestimated my ability. But after navigating a few tight corners without falling off, I settle into the ride down Maydena Bike Park, allowing myself to steal longer glimpses of the ever changing landscape as we descend more than 2,600 feet through a web of 62 trails (and counting) threading down a hillside northwest of Hobart.

“I like to think of this section as our own Jurassic Park,” assistant manager Luke Reed tells me as we weave between lofty king ferns in the temperate rainforest that hugs the slopes. Since decamping from the mainland two years ago when he got wind of the Maydena development, Reed says he hasn’t looked back. “There’s just so much to do here,” he says. “We’ve got Marriott’s Falls and Mount Field just down the road, and I still haven’t ridden all the trails in Maydena.”

While Maydena is Tasmania’s only all-downhill bike park, it’s just one of a growing number of top mountain bike parks popping up around the state. Just north of Launceston, Hollybank Mountain Bike Park opened in 2014 with a six-mile descent called the Juggernaut that draws riders from around the world.

The following year, the former tin-mining town of Derby transformed into Australia’s premier mountain biking destination overnight following the opening of Blue Derby Mountain Bike Trails. And the scene continues to evolve, with the first section of the St. Helens Mountain Bike Trail Network, 40 miles southeast of Derby, having opened in November.

“You can even ride some of the Mount Wellington trails,” says Reed, as we peel off our helmets. Relieved to have completed a lap of Maydena without having to test the limits of my travel insurance, I take his word for it.

My guide, Liam Weaver, sees it first. Following his lead, I kayak slowly toward the small brown lump moving across the water. Suddenly it stops, its slick furry body and iconic “duck bill” more visible as it pauses on the surface for a few seconds before diving under the tannin-stained water. It’s my first wild platypus sighting, and I’m rapt.

“On some trips we spot more than 20,” says Weaver, grinning back at me, and I snap back to scanning the river for more platypus activity.

One of Australia’s most elusive creatures, these shy monotremes (egg-laying mammals) thrive in the upper Derwent River, which snakes down a rural valley northwest of Hobart lined with sheep farms and hop plantations that scent the air with an odd mix of lanolin and beer. Weaver estimates 30 to 50 breeding pairs of platypuses make their homes here, setting the scene for Tassie Bound’s flagship kayaking tour.

“When Liam first took me down here on a kayak, it felt like we were being gifted an opportunity to create a unique, sustainable tourism experience,” Liam’s wife and business partner, Fiona, tells me after the tour. She also runs Wild Island Women, Tasmania’s first female adventure community. “Even some locals are unaware that we have this incredible wildlife-spotting opportunity on our doorstep,” she says.

Even if you don’t see any platypuses, it’s a ridiculously scenic afternoon paddle downriver. Three years since launching the tour, Tassie Bound remains the only operator on the river, which adds to the sense of adventure. The couple also run various other kayaking tours, and there’s some beautiful kayaking to be had around the Freycinet Peninsula, though keen paddlers in search of the ultimate off-grid adventure would be wise to check out Roaring 40s Kayaking’s multiday expeditions in the rugged, hidden waterways of the Tasmanian Wilderness World Heritage Area.

Operated in the same region is Australia’s most spectacular white-water rafting experience, an eight-day adventure down the Franklin River, which was saved from a dam project in the ’70s, thanks to one of the most significant environmental campaigns in Australia’s history.

“The experience of paddling down the untamed wilderness of the Franklin, which has no man-made infrastructure whatsoever, is incredibly powerful,” says Tassie-born Elias Eichler, who runs Franklin River Rafting with his wife and fellow rafting guide, Franzi. “The water is so pure we have a cup hanging off the side of the boat that you can just dunk in the river if you get thirsty. Where else can you do that these days?”

From King Island Dairy cheeses to Bruny Island oysters, Tasmania’s edible output is legendary, and with more than half a dozen established food and drink trails across the state, choosing your own culinary itinerary is one of Tassie’s most rewarding soft adventures.

Given its ideal climate for malting, Tassie’s Whisky Trail is a good place to start. Following a suitably weird morning at the Museum of Old and New Art (MONA), Tassie’s flagship cultural institution and an adventure in itself, I drop into Shene Estate, just a 30-minute drive north of Hobart. The Kernke family has painstakingly restored an exquisite 19th-century Gothic-Revival sandstone stables and barn, the latter now acting as the tasting room of the family distillery.

The first release of their triple-distilled Mackey whisky won the gold medal at the 2018 San Francisco World Spirits Competition, but I’m partial to their Poltergeist gin. It was named in honor of the pagan witch-protection symbols etched into the buildings during colonial times, though Anne Kernke, who runs tours and tastings by appointment, hints there’s more to the story. She once experienced the sensation of someone sitting on her bed when she was in it, and nobody else was around. “We love a property with spirit, so we thought we had better make some,” she winks as she pours me a gin and tonic.

Other paths reveal the spectrum of Tasmania’s tastes. Oenophiles follow the blue-and-yellow signs along the 105-mile loop north from Launceston to discover more than 30 cellar doors on the Tamar Valley Wine Route. The Made on Bruny Island gourmet trail is ideal for oyster and cheese lovers.

While tucking into a perfectly battered fillet of trevalla from one of Hobart’s famous floating fish-and-chip shops, I think that if there’s a downside to seeking adventure in Tasmania, it’s that no matter how hard you throw yourself into it, you’ll be lucky to go home any lighter.

Taking another bite, I figure I can live with that.

Sarah Reid is a freelance writer who is always up for a sustainable travel adventure. Follow
her on Instagram. Melbourne, Australia-based Ewen Bell has previously photographed Laos for National Geographic Travel. Follow
him on Instagram.