“This president is no ally of people living with HIV, who are disproportionately LGBTQ and people of color,” DNC ChairmanTom Perez

“His administration has proposed cutting global HIV-prevention programs and attacked health care services that people living with HIV rely on, including the Affordable Care Act, Medicaid, and Planned Parenthood,” they said.

The Democrats also said they are mourning those lost as they recognize World AIDS Day.

In addition to administration policies, Democrats also hit the president’s son, Donald Trump Jr., over his “despicable attack on people living with HIV.” Trump Jr. had earlier retweeted an article by Queerty titled: “What you stand to lose by not having sex with people with HIV.” “Well I can think of one thing,” he added.

Trump Jr. was also criticized by advocates and groups, including theHuman Rights Campaign,which called on the president’s son to apologize.

White House spokesperson Judd Deere pushed back on the DNC’s statement, saying on Sunday that the president and his administration are “supporting those living with HIV and AIDS.”

“It was this President who boldly declared in his 2019 State of the Union Address that we are going to end HIV transmissions in the United States within 10 years – a commitment that when achieved will save LGBT lives across the country. It’s no surprise that the DNC would attack this President and ignore the facts on World AIDS Day instead of honoring and remembering those we have lost,” Deere said.

Trump announced his administration had a goal to end the HIV epidemic in the U.S. in 10 years during his State of the Union address earlier this year. The Trump administration initiative aims to reduce new HIV infections in the U.S. by 75 percent in five years and 90 percent by 2030.

Trump reaffirmed his commitment to end the epidemic in a tweet Sunday.

“On World AIDS Day, The First Lady and I express our support for those living with HIV/AIDS and mourn the lives lost. We reaffirm our commitment to end the HIV/AIDS epidemic in America, community by community where we will eradicate AIDS in 10 years, program already started. American leadership has proven that together we can save lives,” he said.

….in America, community by community where we will eradicate AIDS in 10 years, program already started. American leadership has proven that together we can save lives.

The DNC officials also touted House Democrats for passing bills to lower prescription drug costs and protect access to “the healthcare that those living with HIV deserve,” and for fighting to pass the Americans with Disabilities Act and ensure it protects against discrimination based on HIV/AIDS status or perceived status.

“Democrats are committed to ending the stigma and the epidemic,” the DNC officials said.

“We stand in solidarity with those living with HIV and AIDS in America and around the world.” 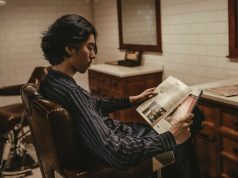