Home Environment The story of the world’s loneliest tree

After seven decades of cuttings, failures, plant enzymes, a little coaxing, and a Māori blessing, one of the world’s rarest trees—which lives on a tiny island 40 miles off the northern edge of New Zealand—might lose its title. And that’s a good thing.

A team of scientists and Ngāti Kuri, the regional Māori tribe, recently returned from the island, where they scoped out potential conservation plans. Ngāti Kuri members even planted 80 kaikōmako saplings on the mainland this year.

Yet those positive developments happened only by answering two important questions. How do you rescue a tree with no mate, and who shares that task?

Many goats and no fruit

The story of the kaikōmako resembles its home: rocky, with a generous dose of luck.

Botanists identified one wild specimen in 1945 on the largest of the Three Kings Islands, Manawatāwhi in Māori, which is a little bigger than Manhattan’s Central Park. The tree isn’t simply remote. It’s completely alone.

Four were released on the island in 1889 as a food source for possible shipwreck victims, and the population increased one hundredfold until the invasive animals were eradicated in 1946.

Goats ate several island plant species out of existence, but the kaikōmako survived by way of the classic real estate maxim. Location. In this case, it lived out of reach in a steep boulder field 700 feet above the ceaseless swells.

Some scientists recognized the kaikōmako as invaluable, a piece of New Zealand’s biological heritage one calamitous storm away from vanishing. Others questioned whether it really was alone; perhaps it was a far-flung individual of an ordinary tree type that didn’t require extra concern.

Experts debated the taxonomy for decades until they settled on Pennantia baylisiana as a unique species. Its genetic relatives are dioecious, meaning they grow male and female flowers on separate plants, an impossible problem for a species with a population of one.

“This one is a peculiarity,” says Geoff Davidson, who previously owned a nursery near Auckland.

The original kaikōmako, a female, blossoms with some flowers that produce pollen, the male counterpart. Scientists speculated whether those vestigial male bits could function in a surprising case of self-pollination. But understanding biological fundamentals collided with the plant’s rarity. Years elapsed between island visits by scientists, whose learning aids only included a few mainland-grown cuttings taken from the lonely tree.

Ross Beever, an Auckland scientist who studied fungi in his day job, frequently stopped to inspect one of those cuttings, now an adult, on his lunchtime walks. Clusters of white flowers bloomed on the tree but then withered without fruit.

No fruit, no seeds, no new trees.

That inability to reproduce provoked an intense curiosity for Beever that propelled him to investigate.

“Ross short-circuited things,” Davidson says of his friend, who died in 2010.

Beever attempted to focus the tree’s attention—water and nutrients—on a single bunch of flowers.

After several trials, Beever found a way: a herbicide that mimics natural plant growth hormones. The solution, weak enough to avoid harming the prized plant, could help dissolve the hard exteriors of pollen grains to aid fertilization. Then, the hormones could amplify early signals transmitted by fertilized fruits back to the tree —think of tiny radio pings that say, hey, send more attention our way.

Such abundant indicators convinced the kaikōmako to unleash enough reproductive energy to develop mature purple fruits, less than a half-inch long, each containing a viable seed.

“It took a scientist with a fairly good lateral-thinking brain to come up with that,” Davidson says.

He and Beever cultivated the first six seedlings in the 1980s and early 1990s. Davidson began selling kaikōmako from his nursery and donating the proceeds to conservation organizations. He asked customers to contact him when the trees flowered.

“We thought we would get a fully fledged male,” he says. “We had that expectation.”

None appeared. And all those new trees, while incredible, didn’t provide any direct insurance against extinction. That would require establishing wild trees on the island.

With seeds finally available, the government’s recovery program started in 2005 by planning for disaster.

Botanist Peter de Lange, then a scientist with the New Zealand Department of Conservation, worked with Janeen Collings, a plant conservation ranger. They designed protocols to prevent the transfer of any pests or diseases from the mainland, including the feared Phytophthora, a group of common soil pathogens infamous for causing the 1840s potato famine in Ireland.

“If you get it wrong,” says de Lange, “you will be dooming a raft of endemic plants to rapid extinction. All it would take is someone with a dirty spade or grubby shoes.”

Researchers cleaned the kaikōmako seeds—4,000 of them thanks to Davidson’s nurturing—packed them into cold storage, and opened their cargo only after landing on Manawatāwhi.

“It wasn’t just, yeah let’s go out there and chuck a lot of seed around,” Collings says. “That would’ve been miles easier but not appropriate.”

She and her colleagues gridded plots across the island to determine where else the kaikōmako might thrive. They couldn’t assume that the shallow soil on the cliff provided optimal habitat. That tree is merely the one goats didn’t chew into oblivion.

By 2012, the team had celebrated 65 tiny successes. They had also delivered 500 seeds to Ngāti Kuri, the local Māori, in an important act of conservation equity.

Māori believe that when they die, their wairua, or spirit, travels to Manawatāwhi for a final glance back at Aotearoa, their home, New Zealand. The island represents a critical component of that worldview, and the kaikōmako plays a part.

Until several years ago, government authorities had prevented iwi, or Māori tribes, from maintaining traditional practices like guardianship of the islands, according to Sheridan Waitai. She’s the executive director of the Ngāti Kuri Trust Board, which manages her tribe’s relationship with the government.

The kaikōmako “is part of the fabric of life,” Waitai says. “Every species that disappears is a tear in that fabric, in our histories and our cultures.”

Westerners introduced goats to a delicate island ecosystem and later stole a sucker shoot from the last kaikōmako. The subsequent scientific activities, though one-sided for too long, did ensure the survival of taonga, or precious resources and treasures.

So Ngāti Kuri invited scientists to forge an integrated approach.

“We said to them, unless you share this knowledge you take from our region, we will no longer be supporting research on our land or ocean,” Waitai says.

Ngāti Kuri now co-manage Manawatāwhi with the Department of Conservation.

Ngāti Kuri continue to work with botanists and other experts to search for the best habitat and plan for the day when wild trees again dot Manawatāwhi. The inaugural iwi-led trip to the island happened in October, and though the team spotted zero saplings, they didn’t comprehensively search the government plots amid an otherwise reforested landscape.

For now, as it has for generations, the kaikōmako persists unaccompanied. The difference today: Friends wait just beyond the horizon. 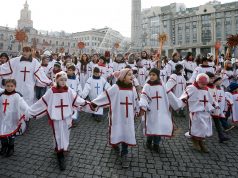 Why some people celebrate Christmas in January