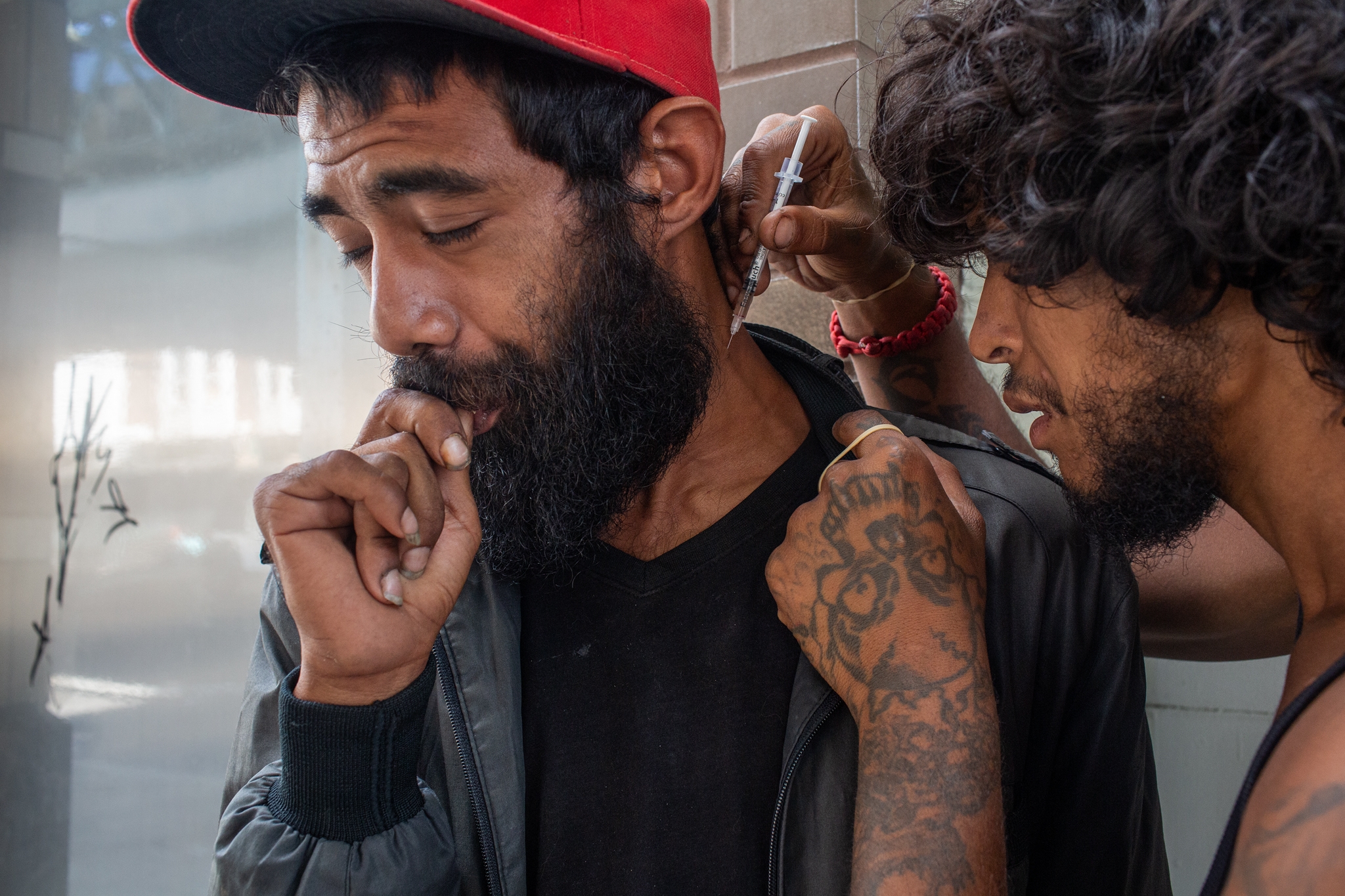 Photographer David Guttenfelder has documented horrors around the world, but he was shocked by what he saw on a Philadelphia street.

Fernando Irizarry’s addiction began with pain medications he took after an accident. He invited me to observe his life on Kensington Avenue, and I spent two days with him. Unable to find a usable vein in his arm, bruised from repeated injections, he asked an acquaintance to inject a slurry of discarded drugs into his neck. On the street, addicts often look out for each other, administering narcotics but also saving lives with Narcan, an overdose-reversal nasal spray.

Photographer David Guttenfelder has documented horrors around the world, but he was shocked by what he saw on a Philadelphia street.

This story appears in the
January 2020 issue of
National Geographic magazine.

“One thing you should know,” one man advised me. “No one on this street imagined they would end up like this. Every person here thought they had it under control.” That street could be anywhere in addicted America. This one is Kensington Avenue, a bleak stretch that runs beneath the elevated tracks in Philadelphia. I went there to witness the opioid crisis, to understand how people seeking relief from pain had ended up on the street.

I’ve seen extreme misery in wars and natural disasters, but I was stunned by what I found in my own country. The rules of society seemed to have vanished. What remained was a raw struggle for one thing: the rush of relief from pain. (Read how empathy and new treatments come together to fight pain.)

In Philadelphia 1,116 people died from a drug overdose in 2018, more than twice the number five years earlier, and eight out of 10 of those deaths involved opioids.

Hundreds of people live on the street. High, or searching for a high, they slump against storefronts, they drift through parking lots. Many are emaciated, weak, scarred from shooting up. Desperate, they pierce their arms, ankles, necks with needles.

Fernando Irizarry (top photo, at far left) lives on this street. He is 33, small and thin, with a dark beard. He walks with difficulty, shuffling on atrophied legs. He is funny, thoughtful, and kind, but distracted, searching constantly for discarded bottle caps used to mix drugs. When he collects enough of them, he scrapes together the dregs for his next shot.

On September 11, 2005, he hit the back of a car on his motorbike. As a kid, he’d loved school. The strongest substance he’d tried was chewing tobacco. After months in rehab, he was discharged on Percocet. When his family physician passed away, his new doctor refused to renew his prescription. He found the pills on the street. But there, he could pay $10 for two or $5 for a shot of stronger heroin. “That was the choice I made.”

At first I was intimidated, unsure how to approach people. When I did, though, their stories were familiar. Stories about their pain, but also about college days, fulfilling jobs, loving families, plans for the future. On cracked screens of mobile phones, I saw evidence of their former lives. And I saw them cling to the vestiges. Recalling her days as a dancer, a young woman, bone thin, took off a boot and performed an en demi-pointe pirouette.

The opioid addicts I met are our children. They are our mothers and fathers. They are college students and professionals. Enduring a chronic illness or striving to recover from an accident, they could be any one of us.