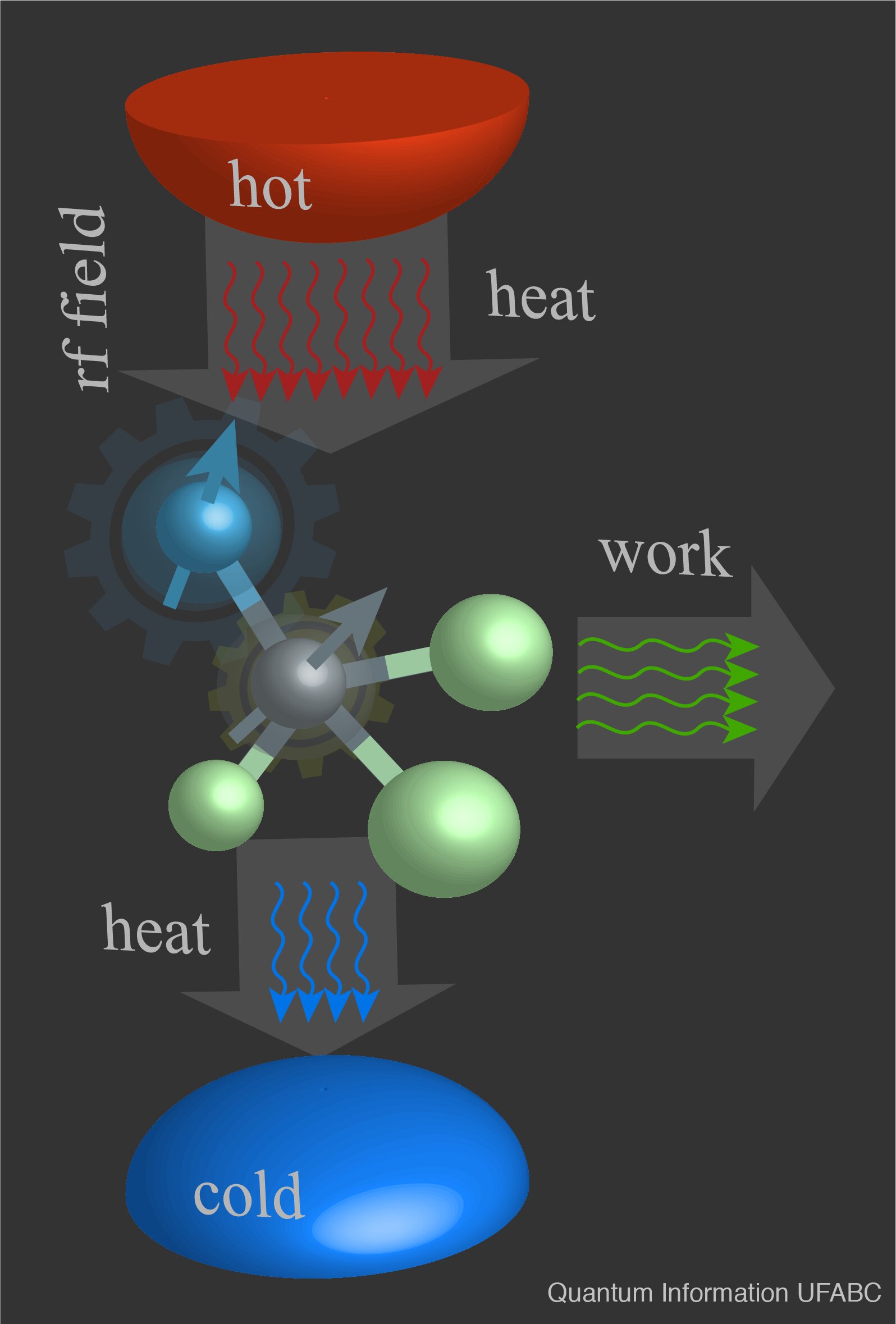 The theoretical notion of a ‘quantum heat engine’ has been around for several decades. It was first introduced around sixty years ago by Scovil and Schulz-DuBois, two physicists at Bell Labs who drew an analogy between three-level masers and thermal machines.

In the years that followed, other researchers have developed a variety of theories building on the ideas of Scovil and Schulz-DuBois, introducing proposals of thermodynamic cycles at the quantum scale. Very recently, physicists have started testing some of these theories in experimental settings.

One of these experiments was carried out by a team of researchers at the University of Waterloo, Universidade Federal do ABC and Centro Brasileiro de Pesquisas Físicas, who successfully demonstrated a spin quantum heat engine in a laboratory setting. Their paper, published in Physics Review Letters, outlines the implementation of a heat engine based on a spin-1/2 system and nuclear magnetic resonance techniques.

“The so-called ‘quantum thermodynamics’ are currently under development,” Roberto Serra, one of the researchers who carried out the study, told Phys.org. “This emerging field is also associated with developments in quantum technology, which promises a kind of new industrial revolution at the nanoscale with disruptive devices for computation, communication, sensors, etc.”

In their experiment, Serra and his colleagues successfully implemented a proof-of-principle quantum heat engine using a nuclear spin placed in a chloroform molecule and nuclear magnetic resonance techniques. The researchers specifically manipulated the nuclear spin of a Carbon 13 isotope using a radiofrequency field, ultimately producing an Otto cycle (i.e., the thermodynamic cycle used in most common motors).

“The energy difference between the two possible nuclear spin states (let as say up and down) was increased and decreased similar to a piston expansion and compression in a car engine,” Serra explained. “Under some conditions, the nuclear spins in the molecule can absorb and release heat from/to radio waves.”

Energy fluctuations play a crucial role in the quantum scenario that Serra and his colleagues focused on. Measuring these fluctuations in a thermodynamic cycle, however, is an extremely challenging task, which the researchers were surprisingly able to complete. They found that when performing a quantum Otto cycle at maximum power, their quantum heat engine could achieve an efficiency for work extraction of η≈42%, which is very close to its thermodynamic limit (η=44%).

“In the present experiment, we were able to characterize all energy fluctuations in work and heat, besides the irreversibility at the quantum scale,” John Peterson one of the co-authors of the study, told Phys.org. “Fast operation of our molecular machine produces transitions between the spin energy states, which are related to what we call ‘quantum friction’ that reduces performance. This kind of friction is also associated with an increase in entropy. On the other hand, a very slow operation (that decreases quantum friction) will not deliver a considerable amount of extracted power. So, the best scenario is to conciliate some amount of power with low levels of quantum friction or entropy production, in a similar way to what modern engineering does in cars’ engines.”

The study carried out by Serra and his colleagues is among the first to experimentally demonstrate a proof-of-concept spin quantum heat engine. This proof-of-concept heat engine could ultimately inform future studies exploring the functioning and potential of quantum thermal machines.

“In our experiment, the tiny spin engine reaches an efficiency close to its thermodynamic limit at maximum power, which is much better than what car engines can do nowadays,” Serra said. “The quantum spin engine would not be very useful in practice since the work produced would supply a very small amount of energy to radio waves. It would only be sufficient to alter another nuclear spin. We are more interested in measuring how much energy it uses, how much heat it dissipates, and how much entropy is produced during operation.”

In their future work, Serra and his colleagues also hope to identify ways to optimize the operation of small quantum thermal machines, demonstrating their effectiveness in real experiments. This could ultimately help to build more advanced quantum refrigerators that could be implemented in new quantum computers.

This document is subject to copyright. Apart from any fair dealing for the purpose of private study or research, no
part may be reproduced without the written permission. The content is provided for information purposes only.