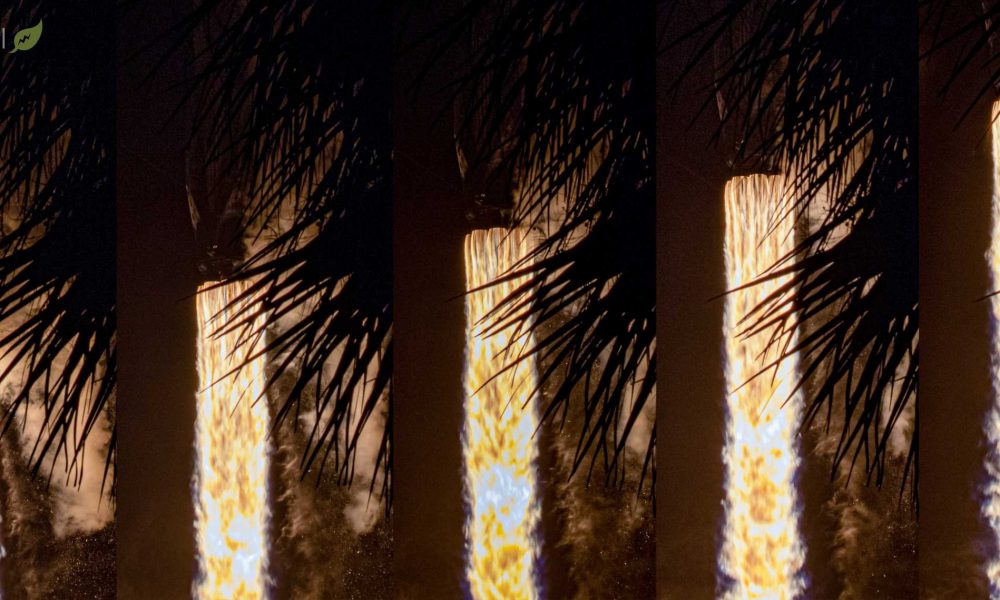 SpaceX’s workhorse Falcon 9 rocket has completed its thirteenth launch of 2019, leaving the vehicle just one mission away from a major reliability milestone.

At 7:10 pm ET, December 16th (00:10 UTC, Dec 17), Falcon 9 booster B1056, a new upper stage, and the nearly 7-metric ton (15,500 lb) Kacific-1/JCSAT-18 communications satellite lifted off from SpaceX’s Cape Canaveral LC-40 launch pad. As has more or less become the norm, Falcon 9 sailed through prelaunch preparations, payload integration, and launch with zero notable issues and lifted off at the precise start of a ~90-minute window.

Around nine minutes after launch and 30 seconds after the second stage reached orbit, Falcon 9 B1056 successfully landed aboard drone ship Of Course I Still Love You (OCISLY), completing the booster’s third launch and landing in seven months. 27 minutes after launch, Falcon 9’s second stage reignited and burned for more than 50 seconds, raising one end of its orbit by more than 20,000 km (12,500 mi). Five minutes later, Falcon 9 officially completed its mission by gently releasing Kacific-1/JCSAT-18 from the second stage, where the satellite shortly reoriented itself, deployed ~40-meter (~125 ft) long solar ‘wings’, and began verifying its systems’ health.

Aside from another successful and issue-free launch under the Falcon family’s belt, the Kacific-1 mission is significant for another major reason: it’s Falcon 9’s 49th consecutively-successful launch since January 2017. Falcon 9’s last catastrophic failure occurred on September 1st, 2016 when the rocket’s upper stage violently exploded, destroying the rest of the rocket and its Amos-6 satellite payload.

SpaceX took approximately four months to determine the root cause of that failure and modify hardware and procedures accordingly before returning to flight with the first Iridium NEXT launch on January 14th, 2017. In the three years (35 months) since then, Falcon 9 has successfully launched a total of 49 times in a row without even a partial failure. After one additional launch success, Falcon 9 will have flown 50 consecutively-successful missions, a symbolic but still exceptional sign of the rocket’s excellent reliability. That 50th launch attempt could come as early as December 30th in the form of SpaceX’s third 60-satellite Starlink mission, known as Starlink-2.

Technically speaking, if Falcon Heavy is included, SpaceX has already completed 52 consecutively-successful orbital launches without a single failure (or partial failure), the only company or space agency in the world that can currently claim that feat. Although both Arianespace and ULA are infamous for whitewashing the partial failures of their launch vehicles, Ariane 5 unfortunately suffered a partial failure in January 2018, while ULA’s Atlas V and Delta IV suffered their own partial failures in 2007 and 2004, respectively. Atlas V experienced another in-flight anomaly in 2016, although it was not technically classified as a partial failure.

Perhaps even more impressive is the fact that SpaceX has pulled off that feat of reliability in less than three years, unequivocally making Falcon 9 the best all-purpose launch vehicle in the world in terms of its combined reliability and flight frequency – the latter thanks in large part to the rocket’s exceptionally competitive pricing.

As of now, SpaceX has at least two or three-dozen launches nominally planned for 2020 and if all of those launches are successfully completed, Falcon 9 will almost certainly become the world’s most reliable operational launch vehicle by any measure.