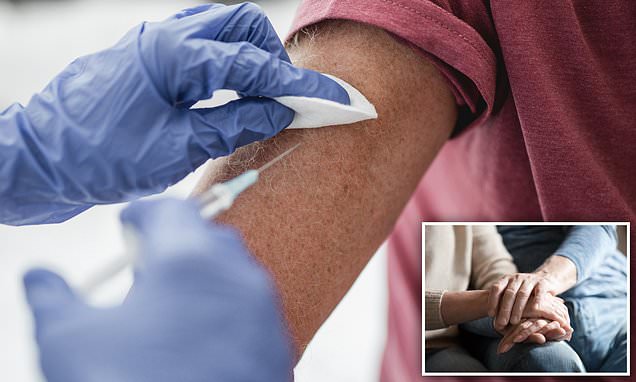 Dementia breakthrough: New vaccine to prevent memory loss is labelled ‘revolutionary’ and expected to hit the market in five years

A potential dementia vaccine developed in Australia has progressed from testing on animals to human trials and is expected to hit the market in the next decade.

The revolutionary drug will be used to reverse the effects of memory loss and has the potential to also prevent Alzheimer’s in people who are predisposed to the debilitating disease.

The breakthrough drug is being developed by scientists including Australian Professor Nikolai Petrovsky at South Australia’s Flinders University as part of a US-Government backed project which has been ongoing for 20 years.

Professor Nikolai Petrovsky, a specialist in endocrinology at Flinders University, has worked on the development of the vaccine in a US-Government backed project which has been ongoing for 20 years

The vaccine is designed to allow antibodies to detect and digest these clumps on the brain, and reverse or prevent the effects of the disease.

The dual vaccine is unlike any treatment available right now, as some medicines are available to help reduce symptoms but none target what happens to the brain.

Prof Petrovsky, a specialist in endocrinology, said the vaccine could be on the market in as little as five years if not within the decade.

‘This is not the start of the journey, it’s the end,’ as he told The Daily Telegraph.

‘This vaccine could be revolutionary. It’s not something that will be available tomorrow, but it’s an exciting step in the right direction.’

A medical breakthrough could see an anti-dementia vaccine on the market in just 5-10 years, as testing moves to human trials

Prof Petrovsky said Alzheimer’s was one of the biggest medical problems of in the country and will only worsen with an ageing population.

Dementia Australia has reported that without a breakthrough, the number of people suffering from dementia in the country is expected to rise to 590,000 by 2028.

Alzheimer’s, the leading cause of dementia, occurs when abnormally formed proteins build up in the brain.

Prof Petrovsky likens the effects of Alzheimer’s disease on the brain to that of an egg when boiled, ‘clumpening and hardening’.

Prof Petrovsky will be based in the US from January – March to help further the research.

He described the ‘big hurdle’ of securing the trials, saying: ‘Millions of researchers make claims of a cure in animals but only a fraction get to the human trial stage’.

He is optimistic that the trials will have begun within 20 months, hoping that the vaccine will be available on the market in 5-10 years.

The vaccine will be used to reverse the effects of the cruel disease which currently affects over 447,000 people in Australia

‘The question with a vaccine like this is, do we use it when people get the very first indication they have a problem?’ he said

‘Or, do we even try to get it to people who are at risk or with a family history, for instance?.

Dementia can affect anyone, most commonly occurs in people over the age of 65, which causes ‘a loss of memory, intellect, rationality, social skills and physical functioning’.