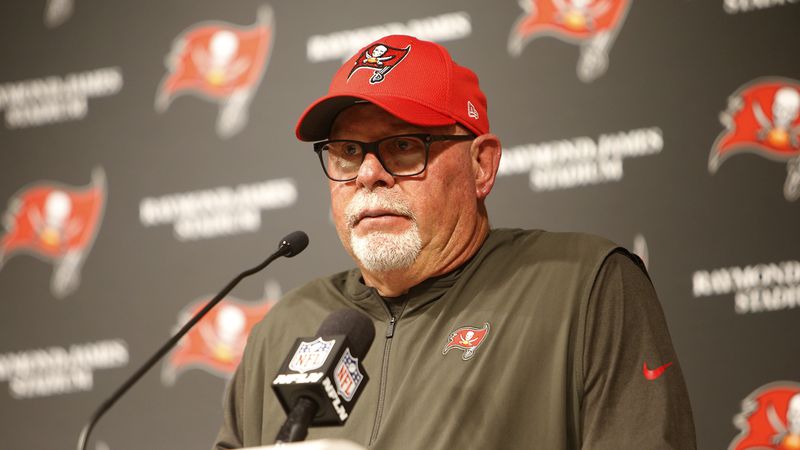 TAMPA — Bruce Arians is ready to end the relationship with his quarterback. Or he wants to begin negotiations.

He can’t get forget all the turnovers. Or he is ready to forgive them.

He doesn’t have time to start over. Or he can’t wait to begin anew.

One day after watching Jameis Winston throw a pick-six on the first play of overtime ― his 30th interception of the season ― in a 28-22 loss to the Falcons, the head coached was asked if this Bucs team could win with another quarterback.

“With another quarterback? Oh yeah,” Arians said. “We can win with this one, we can definitely win with another one, too…we’re going to have this defense.’’

Over the past 24 hours, Arians’ has sharpened his criticism of Winston while trying not to dull some of his accomplishments.

Like most things involving Winston, it’s open to interpretation.

All we know is this: the Bucs will decide what to do with Winston in a couple of weeks.

“I would think within a few weeks we’ll have a decision which way we want to head,” Arians said. “Will we let it out? Probably not because you lose your leverage on that one, too, so stay tuned.”

How could we not?

The Bucs finished 7-9 under Arians in his first season, rallying from a disastrous 2-6 start. While Winston passed for 5,109 yards and 33 touchdowns, both club records, he also became the first player in NFL history to throw at least 30 touchdowns and 30 interceptions in the same season.

In fact, he had a record seven interceptions returned for touchdowns, including one each in losses to the Texans and Falcons to end the season.

Arians admitted Monday that typically, a quarterback wouldn’t continue to start games with that many turnovers. He also lost five fumbles.

“I think that’s where you sit down with him and talk it all over and all of us ― Clyde (Christensen), Byron (Leftwich), myself, Jameis ― and evaluate him,” Arians said, mentioning his quarterbacks coach and offensive coordinator. “Is 5,109 (yards) good enough to win a championship? Or is it the 30 (interceptions) and whatever many fumbles losing the championship? So that’s where you go.”

Chances are it will be a split decision.

There’s no bigger public supporter on the staff than Leftwich, who remembers when he was a first-round pick at quarterback who the Jaguars moved on from.

Arians has a lot of swag and likely believes he can with a lot of players under center. The self-anointed quarterback whisperer was hired to see if he could cut down on the turnovers by Winston, the Bucs No. 1 overall pick in 2015. But Winston had five games with three or more interceptions. Seven interceptions came on the first series of the game, four on the first play.

“Yeah, it’s frustrating,” Arians said. “To see the growth was great but to see the regression in some areas was very frustrating.”

Meanwhile, the rhetoric has been turned up on both sides.

After Sunday’s game, Arians said, “There’s so much good and so much outright terrible.’’

Winston said he’s not worried if his turnovers will ultimately cost him his job. “I know if I eliminate those, I’m going to be the best. That’s bar none. You better check your sheet.’’

He also would like to extend the contract of receiver Chris Godwin.

The Bucs are projected to have about $89 million of space under the salary cap.

“The receivers, the d-line, the outside linebackers, the quarterback ― they’re all in that same pot,” Arians said. “There’s only so much to go around. We’ve got to sit as an organization and decide where do we want to go?”

The Bucs have several options with Winston. They can apply the franchise tag, which would guarantee him a one-year contract worth about $25 million to $27 million. Or they could attempt to sign him to a longer-term contract.

Or the Bucs could look at free agency where quarterbacks such as the Saints’ Teddy Bridgewater, the Chargers’ Philip Rivers, the Titans’ Marcus Mariota and perhaps even the Panthers’ Cam Newton could become available.

“Well, free agency, who’s available,” Arians said. “What’s behind Door No. 2. That’s the first question. Then as you evaluate for the draft, that’s another question. Are they better than what you have? Then you evaluate and that’s when you make your decisions.”

Arians was asked what he would like to say to Bucs fans.

“That we will quit beating ourselves and then we will be hard to beat,’’ Arians said. “Penalties, the turnovers. There are very few missed assignments anymore. The accountability is there. We play extremely hard. We’ll be a tough out.’’

In a few weeks, maybe we’ll know if he wants Winston to be a part of it.

Photos: Buccaneers take on the Atlanta Falcons Sunday at Raymond James in Tampa