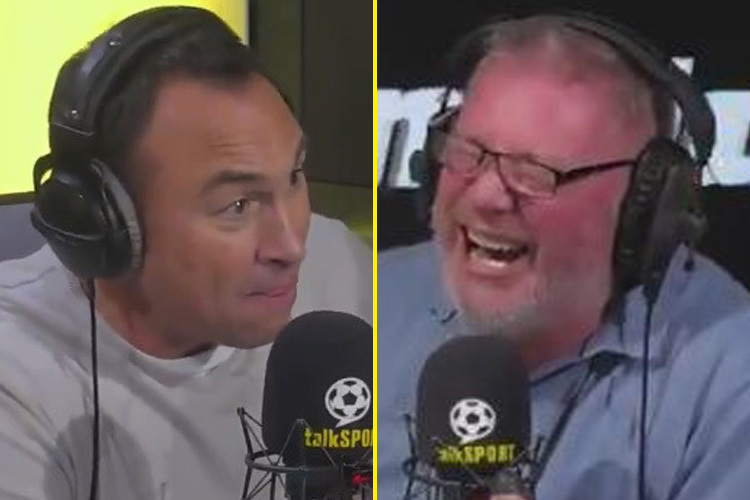 As another eventful year of sporting action and frivolity comes to a close, we recall some of the best moments on talkSPORT in 2019.

It’s been a huge year for talkSPORT as we’ve brought you more live Premier League games than ever before, all from our brand new London Bridge HQ.

There have also been both hilarious and hard-hitting moments with a host of top guests. So what better way to spend your Christmas than to look back on the highlights of the year on the talkSPORT airwaves!

It’s only a few weeks old, but we kick things off with a story that has already gone down in talkSPORT folklore, from everybody’s favourite Scot, Ally McCoist.

As the headline says, it’s the most Scottish thing to happen, ever.

The story behind Ally McCoist’s new haircut is brilliant and the most Scottish thing to happen ever!

Check out the best of Ally McCoist on talkSPORT HERE.

We love inviting our listeners to have their say on talkSPORT, but you sure are a funny bunch.

We get all sorts calling into our shows at all times of day to share what’s going wrong and what’s going right at their club.

And of course, the most memorable calls are always the most outrageous. He’s a selection of the craziest calls we’ve had this year…

“I’m a Liverpool fan, we should get a trophy even for finishing second!” 🏆

“It doesn’t need to have a name, they should just give it to Liverpool.” 🔴

“Ferguson never got that many points.”#LFC fan tells @AndyGoldstein05 the club should get a trophy for second. pic.twitter.com/3Jmk17gmAv

‘We had bigger tests in the Championship’ – Sheffield United fan trolls Arsenal after shock victory, says it ‘felt like playing Ipswich or Wigan’. Ouch!

One of the most-talked about moments on talkSPORT this year happened just weeks ago, as Simon Jordan went head-to-head with AFTV creator Robbie Lyle.

Following on from their fierce online feud, the talkSPORT pundit and Arsenal superfan finally met on the White and Sawyer show, and it got a little bit personal.

it was must-listen radio, and you watch back a section of their debate below, or listen to the full 40 minute-long rant HERE.

2019 was the year Eddie Hearn took social media by storm, without even realising it.

So talkSPORT caught up with the Matchroom Boxing supremo to put a selection of the No Context memes in some context.

And what we ended up with, was a video of a man laughing at himself for three minutes.

Still, you want to watch it don’t you? OH, GO ON THEN!

“Embarrassing… I can’t believe I have to watch these back.” 🤦‍♂️

We put him to the test… 🤣 pic.twitter.com/OsbS7IkLpd

The Gypsy King has always got people talking but his mission in 2019 was not only to punch people’s lights out in the ring, but also to smash the stigma of mental health and depression.

Fresh from publishing his book, Behind the Mask, Tyson joined talkSPORT to discuss his fight with mental health throughout his life and career.

“I came back to boxing to let people know you can come back from thinking about suicide to getting to the top.”

If you listen to one thing today make it @Tyson_Fury discussing his fight with mental health.

Tony the Red became an instant hero with talkSPORT fans for this epic rant at pundit Danny Mills.

Fuming after Mills compared Liverpool’s Super Cup win over Chelsea to winning the Community Shield, Tony asked Mills what he won during his career as a player.

And Tony’s response is absolutely brutal.

The video got more than 700 retweets and over 4,000 likes on Twitter, which prompted our video team to create a hilarious update…

We all love an impression, it’s one of the pillars of British comedy, and so we love it when our talented friends join us in the studio to show off their talents.

This year, we had two of the top impersonators in the county join us to bring a host of boxing and football stars into the talkSPORT studios, including a Chris Eubank so good you would have thought it was actually him!

Today we were joined by top impressionist Alistair McGowan…

…and he was brilliant! 🙌

But we think his @RobbieSavage8 is our favourite of them all 😂 pic.twitter.com/dgmCs9NeBm

“Did he just say ‘penetration’ live on air?”

Yep, he did. Alan Brazil and Ally McCoist were left stunned by Stuart Pearce earlier on this year –find out why HERE.

That’s just a selection of the top moments from talkSPORT in 2019.

Here’s for another memorable year on the world’s biggest sports radio station!