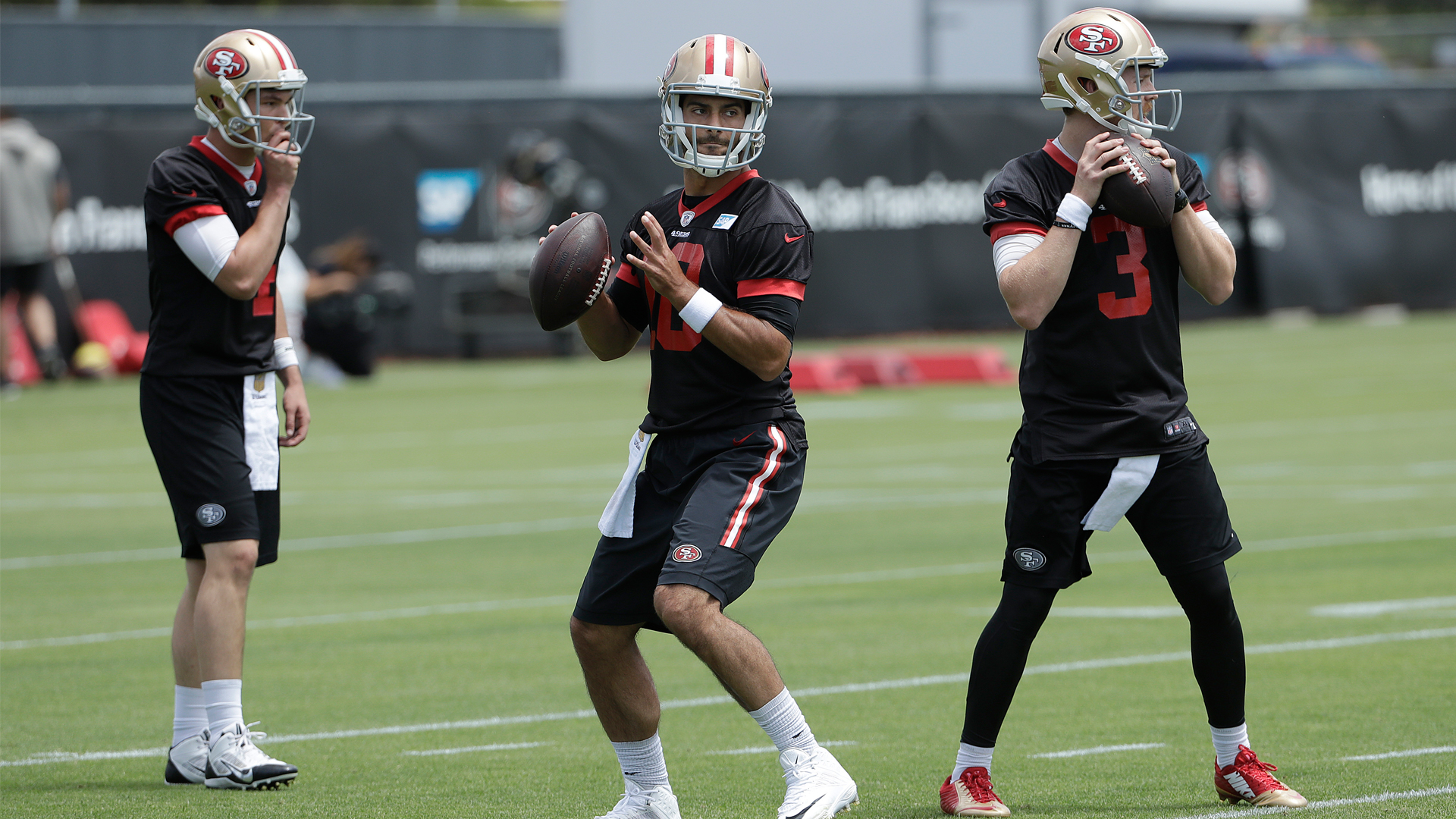 The 49ers had just won one of the biggest regular-season games in franchise history, but quarterbacks Jimmy Garoppolo and Nick Mullens were thinking about something much bigger, something much more important.

The two quarterbacks were thinking about their teammate C.J. Beathard and his family.

A day before the 49ers beat the Seahawks in Seattle, the Beathard family held a funeral for C.J.’s younger brother Clayton, who had been fatally stabbed a week earlier outside a bar in Nashville.

So, in a raucous 49ers locker room, Garoppolo and Mullens took the time to pose for a photo.

According to the 49ers, Garoppolo and Mullens wanted to send the photo to Beathard, who has been away from the team while he grieves the loss of his brother.

If that doesn’t get you a little choked up, I don’t what will.

On the penultimate offensive play for the Seattle Seahawks on Sunday night against the 49ers, Russell Wilson and Co. were faced with a third-and-goal from the 5-yard line with 15 seconds to play.

Wilson tried to find his tight end, Jacob Hollister, on a quick turnaround route but Hollister was unable to make the catch, as he was tangled up with 49ers linebacker Fred Warner.

NBC Sports rules analyst Terry McAulay was in the broadcast booth with the “Sunday Night Football” crew and noted that at the very least, the officials should have paused the game in order to review the call on the field.

“He’s clearly got him grabbed, significantly hindering the receiver. This should be a booth review. I’m surprised they have not stopped the game,” McAulay mentioned on the broadcast.

Coaches are not able to challenge plays in the final two minutes, as all replay reviews must be initiated by the officials.

NFL senior VP of officiating Al Riveron said after the game that the booth officials reviewed the play in real-time, but didn’t feel the contact warranted further discussion. Seahawks coach Pete Carroll wasn’t happy about the call Monday morning and said he hopes the league takes a look at the sequence.

NFL.com’s Gregg Rosenthal explains why he considers the end of arguably the most exciting game of the NFL regular season a “failure” by the league:

“If the NFL is going to take the challenge flag out of the coaches’ hands in the final two minutes of the game, it needs to make sure it takes the appropriate time to review such a game-altering play.

“If someone as experienced as McAulay saw the defender “significantly hindering” the play, it deserves a longer look — at the very least. While Hollister initiated the contact, Warner is literally holding Hollister’s arms down when the ball flies by.

“Taking more time to review the play and then letting it stand would have been curious, but a lot more understandable. There should have been more angles to see and Riveron could have broken the play down in slow motion.

“If the league office wanted to still stick with the call on the field, it would have looked like a questionable bit of execution by the replay officials rather than the failure in process we got. If this play wasn’t worth examining outside the 20-second frenzy of a running play clock, it makes me wonder why exactly the rule was ever put in place.”

The New Orleans Saints faced a similar situation after last season’s NFC Championship, in which a blatantly missed pass interference penalty resulted in the NFL allowing coaches to throw the challenge flag on plays with potential pass interference beginning this season.

[RELATED: 49ers hope to have Ford, Tartt back for divisional-round]

Regardless of what the conversation might be, the Seahawks now must turn their attention to the Philadelphia Eagles for a wild-card weekend showdown, while the 49ers get a week off to prepare to host a divisional-round game on Jan. 11 at Levi’s Stadium.

SEATTLE — For the fourth time in 2019, 49ers tight end George Kittle finished a game with a 100 percent catch percentage. But that’s only one of the many reasons that he has become so important for San Francisco.

In the 49ers’ 26-21 win in Seattle, Kittle caught all seven of his targets for 86 yards. He racked up 1,053 yards on the season, giving him his second 1,000 yard season in a row. Kittle is the only tight end in franchise history to have reached the milestone and now he has done it twice.

In 2009, tight end Vernon Davis tallied 965 yards on 56 receptions. Davis was, however, used regularly in the red zone, managing 13 touchdowns in both the 2009 and 2013 seasons. Kittle scored five touchdowns in each of the last two seasons.

Kittle has become famous for his ability to gain yards after the catch, at times with more than one player hanging off of his body. Facing Seattle was no exception where, according to Pro Football Focus, Kittle forced three missed tackles.

None of those stats matter to the tight end who was just happy that his team clinched the No. 1 seed in the NFC.

“I don’t know, it’s just an incredible feeling,” Kittle said. “Appreciation is a word of something I feel. Just the hard work we put in the last three years finally amount to something that matters. We’re definitely not done but this is something we’ll celebrate for the next 24 hours.”

What doesn’t show up on the stat sheet is what Kittle brings to the table in run blocking and pass protection. His position coach John Embree has stated that the plays that he is most proud of are when Kittle doesn’t have the ball in his hands.

Kittle has also become a solid leader and role model in the locker room. His positive mind set and love for the game is obvious especially when he has not been able to play. Watching the final Seahawks drive go down to the goal line on Sunday reminded him of that mental challenge.

“That felt like I was back in the press box again, watching and not being able to do anything,” Kittle said. “It was stressful. I didn’t leave the bench once. I just kind of watched the screen the whole time and our defense got it done.”

Heading back to Levi’s Stadium to play on Jan. 11 is what Kittle is really looking forward to.

“We get to play more football at Levi’s stadium. I’m really excited to be able to play in front of our fans again.”